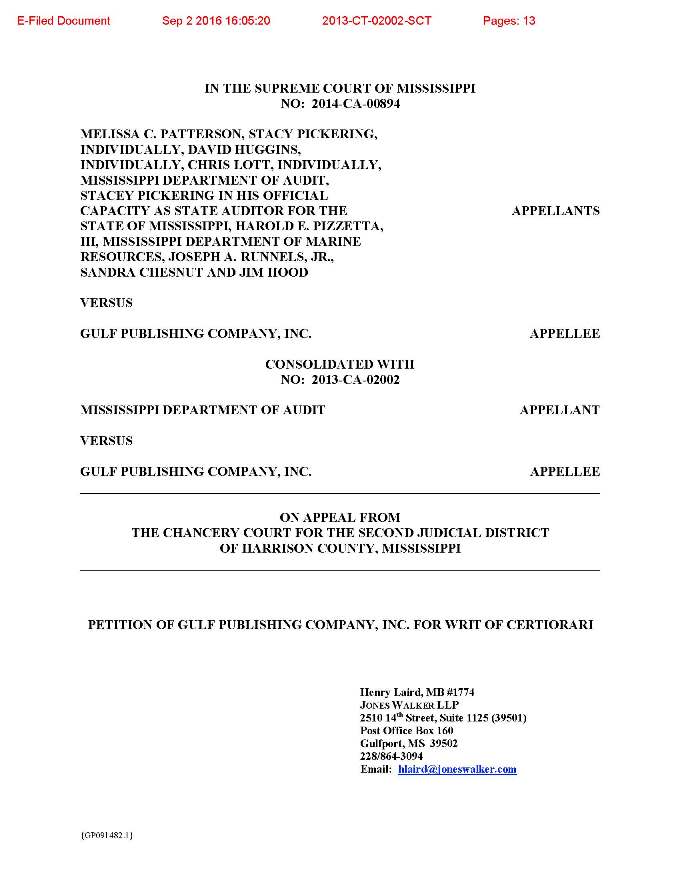 And the good ol’ boys are going to town. A reminder to everyone that Auditor Pickering’s investigation nabbed a few low level DMR employees but refusing to release the formerly public documents will save his political buddies tons of embarrassment. There is a reason Scott Walker feels like that he was betrayed folks, mainly because he was.

I have it on the best authority that business will be picking up rather dramatically and I plan on being at ground zero when the muck begins to fly later today. Meantime we have Mississippi Attorney General Jim Hood joining State Auditor Stacey Pickering in an incredible display of asshatitude per Paul Hampton’s recap of Judge Schloegel’s contempt order against Pickering, Hood and company.

“General Hood curiously stated it might be very embarrassing for a chancery judge to be admonished by a federal judge should the assistant U.S. attorney charge the chancellor with obstruction of justice and contempt of a grand jury subpoena,” Schloegel wrote about the phone call. “General Hood’s hypothetical regarding criminal charges against the undersigned chancellor and other remarks reinforced General Hood’s clear intent not to seek to mitigate the contempt of his client, the auditor, and furthermore, raised questions of his own role, the role of the Attorney General’s Office and the role of the defendants and their employees in the issuance of the federal grand jury subpoena and the wrongful removal of the records from state court jurisdiction.”

It gets better because Pickering, while denying public records to the Sun Herald and coming across like a fool last December at the court hearings on the related litigation stopped woefully short in his investigation into DMR wrongdoing in favor of crushing a few lower level employees that now stand accused of padding their travel by a few hundred dollars a piece. Biloxi Blues summed it up nicely in comments: END_OF_DOCUMENT_TOKEN_TO_BE_REPLACED

Man o’ man that sure was an epic public records battle for the public to have not seen so much as one of the so called public records that were battled over 7 weeks and a day out. Just sayin’.

And so let the muckraking begin. Click the pic to score the 13 page PDF. I thought Phillip Thomas at Mississippi Litigation Review nailed one of the more recent developments in the State Auditor’s Office public records contempt hearing being heard before Judge Schloegel in Gulfport.  The point is short n’ sweet and dead on accurate:

State Auditor Stacey Pickering is asking the U.S. District Court to bail him out of a mess of his own creation.

And this gets us to today’s comprehensive update by Karen Nelson and Justin Mitchell for the Sun Herald on yesterday’s Chancery Court proceedings before Judge Schloegel that ties in with that:

Schloegel stopped the civil contempt hearing, in its second day Friday, so all parties could participate in a conference call with Hattiesburg U.S. District Judge Keith Starrett, who is assigned the federal case.

Also participating in the call were attorneys for indicted former DMR Director Bill Walker and his son, Scott Walker, and other DMR managers indicted in the federal investigation of the DMR.

During the call, Starrett said he had concerns about how it would fit into the investigation if his office found the records are public. Those concerns included the defendants’ right to a fair trial, if there are any grand jury secrets in the documents, and how disclosure might affect any other “targets” of the grand jury investigation.

Early on, when the first indications surfaced that former Assistant US Attorney Sal Perricone engaged in certain extracurricular no-no’s with respect to the massive corruption investigation then underway in Metro New Orleans, certain sage observers predicted the criminal defense attorneys would use it to the benefit of their clients and it worked out exactly that way.  I mention this because although we have a far different fact set in play here, if you take what the Sun Herald put out on the social media real time during the two days of hearings at face value, my spidey senses tell me the spectacle is helping rather than hurting the five former DMR employees charged with state crimes that resulted from the year long investigation conducted by the State Auditor’s office.  The concerns Judge Starrett expressed were not from any first hand knowledge of the contents of the records at question but from experience IMHO.

Here is the text of the minute entry from PACER on the call:

Next up we need to jump back a few weeks and solve a minor mystery of the Federal case against the Walkers, Joe Ziegler and Tina Shumate. Warren Kulo’s story from last month on the gang’s first court appearance for the Mississippi Press sets it up: END_OF_DOCUMENT_TOKEN_TO_BE_REPLACED

Now who is Joel Smith one might ask? (And asked I was by a reader from Central Mississippi) He is the District Attorney for Harrison, Hancock and Stone Counties and the guy in charge of the indictments of the former DMR employees charged with padding their travel by a few thousand dollars. The Federal Grand Jury subpoena of the DMR records went down in close time proximity to the state and federal indictments so this relationship is salient. END_OF_DOCUMENT_TOKEN_TO_BE_REPLACED

If I were retired or had some spare time on my hands I think I’d show up for the hearing, especially since Herr Pickering wants secret proceedings. Seeing Corlew in action is worth the price of admission alone.

Something tells me before this is over, on the political stupidity scale, Pickering will end up in Mr. BrousStar’s league.