Folks, the story of Nicole Nichols trying to approach State Representative Jeffrey Guice is illustrative in a myriad of ways the main one being your average State Legislator is out of touch with the needs of their constituents. In this case we’ve come to a day in the poorest state in the Union where the less fortunate, in this case a family with a breadwinner that works two jobs, are regarded as freeloaders for using state resources in the form of medicaid to keep their Type 1 Diabetes stricken daughter alive.  In the case of the now blocked HB 1523, these same out of touch legislators voted against their own constituents by passing blatantly discriminatory legislation of the type guaranteed to create a backlash against the hospitality industry costing us visitors and the associated tax dollars in the process to go with the self inflicted black eye.  You gotta wonder if these folks have any clue how their average constituent lives and for most of them the answer is a resounding no.

But that doesn’t mean your average $tate legi$lator i$ incapable of communicating. They love communication$ in fact, ju$t a$k Phil Bryant’$ wunderkind Joe Cloyd and Josh Gregory, who routinely $core five and $ix figure no bid communication$ contract$ from $tate governmental agencie$. Unlike the working poor, those guy$ are not regarded as freeloader$ in the rece$$e$ of the $tate Capital $o they must be able to reach the average $tate Legi$lator in a way not widely known to the uninitiated such as Mrs. Nichols.

Now with Mississippi’s campaign finance laws being what they are the best way I can tell to approach a $tate legi$lator for help i$ with a bag filled with ca$h. If you are one of the 47% of the overall populace that doesn’t have $400 laying around to cover an emergency room visit (the number is certain much higher in Mississippi) or contribute to the campaign of your state legislator, do not despair because all is not lost. If I may be so bold as to suggest that Mrs. Nichols offer to communicate via no bid contract on the State’s behalf (with the obligatory campaign finance return of 50% of the loot) her financial worries would be over and the legislative class would hold her in much higher regard.

Just a thought folks, please feel free to add yours in comments. 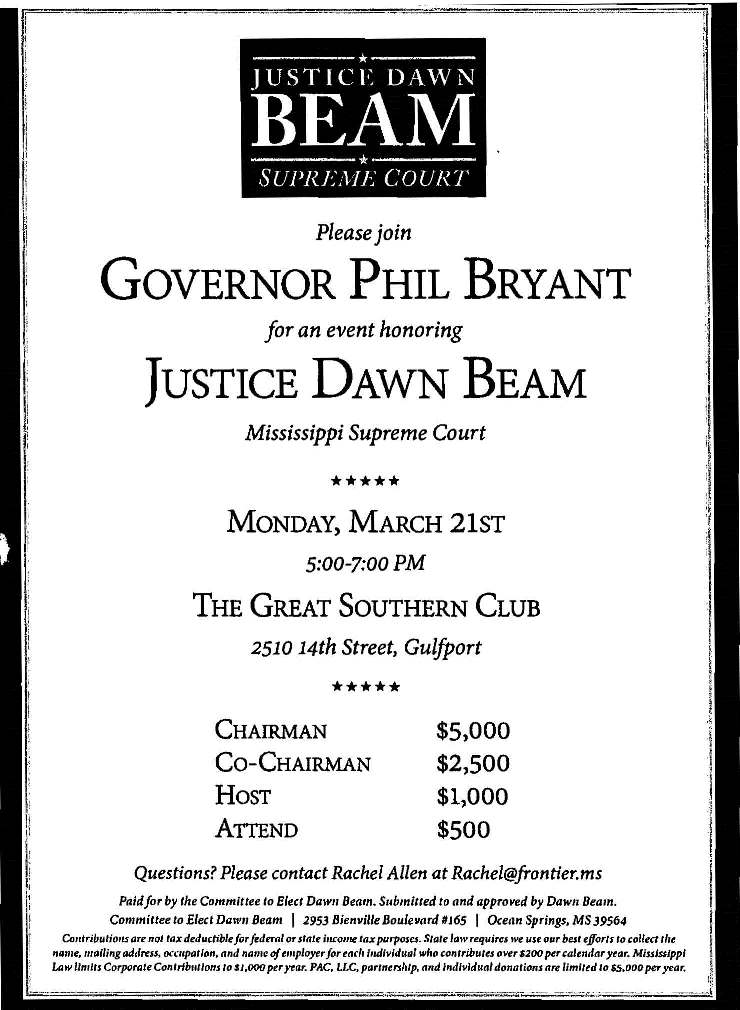 What would appear at first blush to be a straight forward post has gotten a tad more complicated so what I am going to do is identify what the crackerjack Slabbed Investigative Journalism team found plus a bit more and then put some more meat on the bones in subsequent posts.

I guess the first question would involve identifying Waldo and for that we turn to this Google search string to accomplish that. I used Google instead of homegrown Slabbed links to illustrate that the gang at Frontier Strategies has attracted a good bit of statewide media attention and that attention has not necessarily been positive. I’ll let Wayne Weidie explain via this post on the Weidie Report dating back almost a year ago concerning the bruising primary battle between Senator Thad Cochran and State Senator Chris McDaniel that left the incumbent Senator in second place behind the newcomer McDaniel. Here is a snippet:

Poor campaign decision from the start

For his campaign leadership, Sen. Cochran had Kirk Sims and Josh Gregory fostered on him by Sen. Roger Wicker and Gov. Bryant. Sims was Bryant’s chief of staff before he was named campaign manager. No small factor is that Sims is Wicker’s son-in-law. Gregory has always been the man behind the throne for Bryant, and Gregory is already looking for his next horse to ride into the Governor’s Mansion after Bryant presumably is re-elected and serves his second term.

While the Cochran campaign had other able campaign professionals, by any measure, the management of the campaign was a disaster.

For people that make their living doing political coms consulting, the golden children of the Boss Hogg administration have not fared as well since Boss’s coattails departed the Govs mansion back in 2011 and the above criticism, from an well known, seasoned political operative had to sting.  And yet it is more than just giving bad campaign advice as issues involving the maturity certain of the GOP golden boys have also been raised right here on these pages but the focus of my search was for Frontiersman Joe Cloyd and his long rumored no bid contracts with Mississippi DMR that morphed into a long term project.

You see folks normally you’d head straight over to the Mississippi State Transparency portal and pull up all the contracts by state agency and then locate the one you’re looking for – wham, bam, boom its done. But nothing connected with Joe Cloyd ever came up thus the issue became one of resolving the information imparted to Slabbed by sources in the Bolton Building Janitorial Department, an impeccable source of information on all things DMR without cluing the General in as to which sanitation engineer was leaking Slabbed New Media. END_OF_DOCUMENT_TOKEN_TO_BE_REPLACED

There is always gonna be someone that knows the score that is gonna talk to somebody. Reigning in the political hacks/lightweights that permeated Congressman Palazzo’s staff and managing a state agency are two different things.  DMR Executive Director Jamie Miller may find that out one day.

Everyone remember the sweetheart contract Miller let to Frontier Gulf Coast for Public Relations work that the “Public” never discerned?

Maybe the reason Miller keeps firing long time employees is DMR can’t afford to pay salaries after they pay for all their no bid professional services contracts. It is good to see others are paying attention too.

Next up is the mystery lady that emerged from Joe Cloyd’s house to photograph the Beach Protest and the media contingent that was covering the event. END_OF_DOCUMENT_TOKEN_TO_BE_REPLACED

That’s a softball question in the post title because all of the bucks are stopping over at Joe Cloyd’s house for a celebration funded in part by the no bid, $50,000 contract Cloyd scored to supposedly communicate the results of Jamie Miller’s outside CPA firm review of the “culture of corruption” that is the Mississippi Department of Marine Resources.

I don’t know about you good folks reading this, but Slabbed New Media did not discern any communication from Team Cloyd on the topic of the review done by Horne CPA group, a connection Michael Newsom brings up today in his column in the Sun Herald. In fact, a seasoned, albeit slightly jaded pundit would observe stuffing money into a political strawman’s pocket via a no bid $50,000 DMR contract is eerily reminiscent of what Slabbed New Media covered back during the depth of the oil spill with our own Magnum hosting a multitude of political fundraisers in close proximity to receiving a multimillion dollar contract with BP to help with governmental relations. True dat, Cloyd is jonesing by comparison with a paltry $50K but Mississippi ain’t BP.

But this is not what has us common folk upset at Auditor Pickering, no siree.  I was glad to see the Sun Herald Editorial Board was bright enough to pick up the problem today despite Auditor Pickering’s sophistry on the subject and it is at this point that I’ll direct everyone back to a post I did in December 2012, Mississippians are being robbed blind by Phil Bryant’s political cronies. Exactly where are all the bucks stopping:

If this had been a school secretary embezzling a few thousand dollars from the Student Activity Fund or a secretary at (insert name of state agency) doing same that person would be, at the minimum put on a leave of absence while the investigation sorted all the dirty deeds out.  If you are a political appointee of Bryant on the other hand you get to keep your job and search for a graceful exit.

This turned out to be somewhat prophetic because I have also observed the State Auditor’s Office was expert at crushing school secretaries that steal a few thousand dollars and there it is for all to see in Auditor Pickering’s 2013 exception report, which includes as a State Auditor’s Office recovery the restitution from Roger Ladner of Hancock County, a case the FBI and US Attorney’s Office investigated and prosecuted. Like the typical political that he is, Pickering will take credit for everything he thinks will make him look good, even the stuff he had nothing to do with. Let’s take a peeksie at the report: END_OF_DOCUMENT_TOKEN_TO_BE_REPLACED ‘Cause you gotta fight, for your right…… END_OF_DOCUMENT_TOKEN_TO_BE_REPLACED

Low employee morale and problem with leaks with a culture of corruption on top?