The excerpt is very important for a number of reasons but before I get into that we need to fast forward to this past May when Susan Perkins, Leslie Gollott and Grant Larsen copped pleas to state charges related to their tenure of employment at DMR. To the extent Anita’s story that was linked in my post on the topic is now 404, I use the AP wire version that was run in the Washington Times:

While employed at MDMR, two of the defendants said, their supervisor, Tina Shumate, tried to tell them what they should say to investigators then working to uncover crimes in the agency, and she asked them to manufacture receipts, according to court documents.

Now back to those timesheets.  I have studied and pondered them with an auditor’s eye and what I can say is these documents raise very troubling questions. Let’s examine the first timesheet circa October 2010: 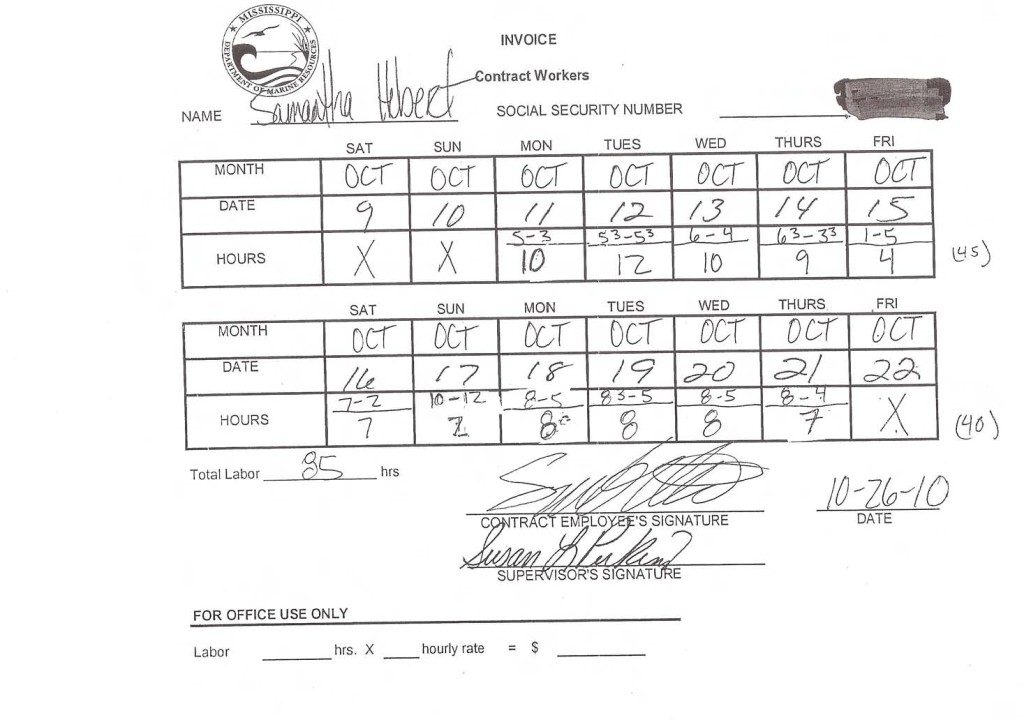 Now lets compare it to another one circa August 2011: 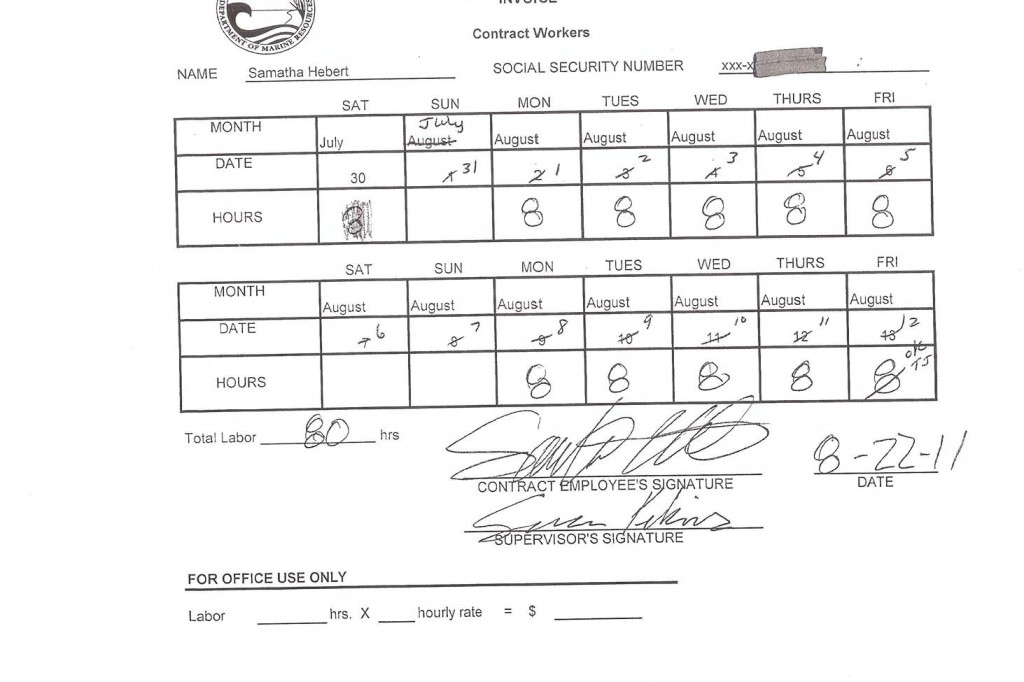 Will the real Susan Perkins please stand up?  Also notice the 2010 time sheet has the time in and time out listed to back up the number of hours while the 2011 time sheet does not. What I need to show to make the larger point though is a timesheet from 2012: 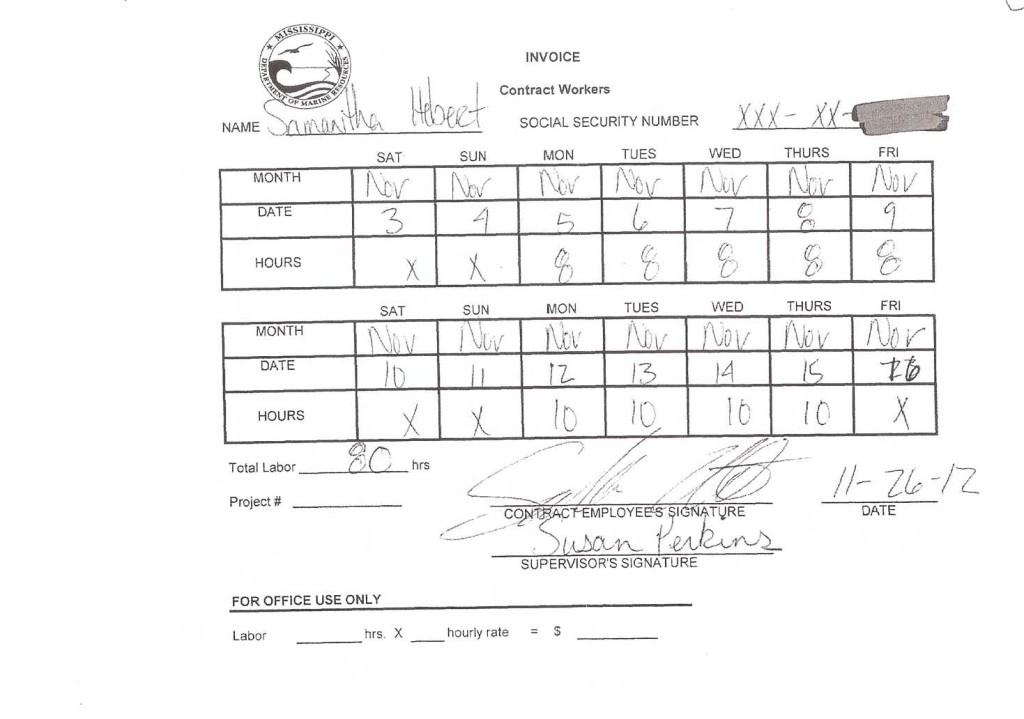 Now it appears we have three versions of Susan Perkins signature but it could be that the 2011 and 2012 timesheets were signed by the same person. However that person could not have been Susan Perkins because she was not employed at DMR in November 2012 in public relations. Lauren Thompson was in charge of Public Relations then per this PRR I found on Muckrock. Once again I turn to the Sun Herald for even greater clarity:

Perkins was moved from DMR’s Coast Management and Planning office in late January to take over as director of the public relations department. She replaced Lauren Thompson, who was reassigned as manager of public relations.

It appears Bill Walker did not consult Samantha Hebert’s timesheets when he said she worked for Lauren Thompson back in December of 2012.  This much is clear, something is terribly wrong with the documents that were used to calculate the $91,300 that was paid to Samantha Hebert by DMR. Finally, I’d like to note that Slabbed contacted Susan Perkins for comment. She declined comment citing her plea agreement and referred me to her lawyer. I also contacted Ms. Shumate’s lawyer Tim Holleman for comment. Mr. Holleman did not return my email soliciting comment before press time.

Update:
Since this post was published I have received a copy of the Probation Order in the case State of Mississippi v Susan Perkins. The last page of the document bears the official seal of Circuit Clerk of Harrison County Mississippi and it contains Ms. Perkin’s witnessed signature. Here it is: 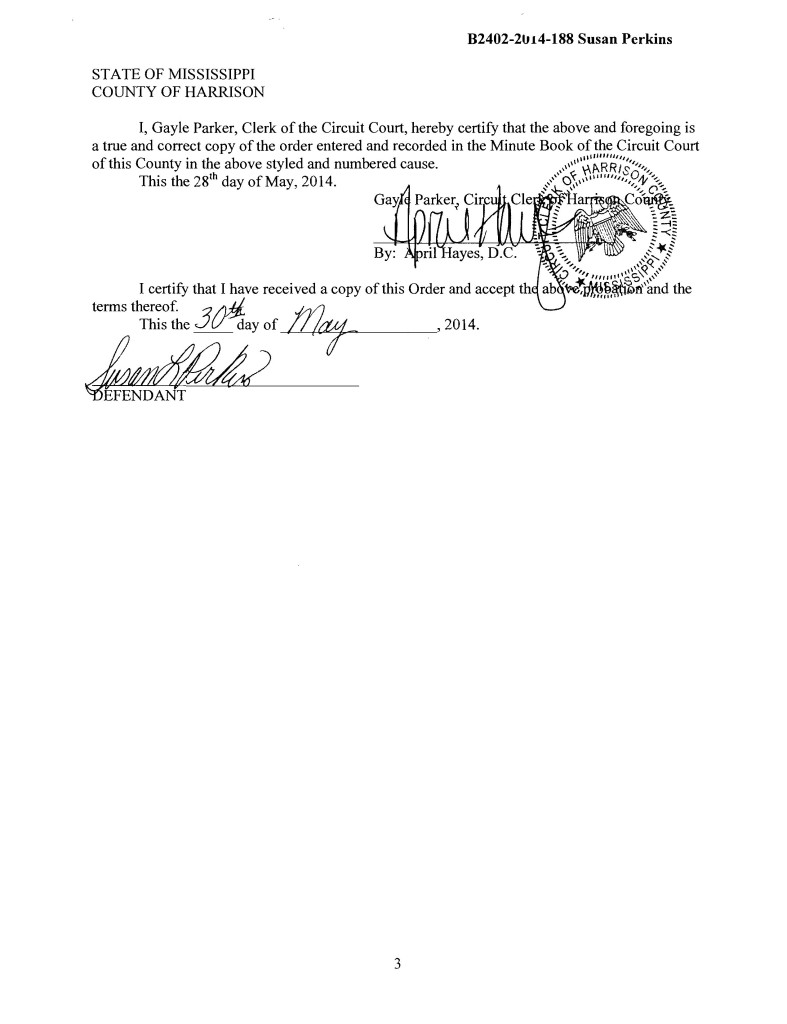 The winner is the 2010 timesheet. The 2011 and 2012 timesheet examples, 2 of 8 such timesheets that I obtained of 9 total, strongly appear to contain a forged signature for Ms. Hebert’s supervisor.  Someone clearly has some explaining to do.