What Wayne Weidie termed the Scott Walker farewell tour has been in progress since last year so pictures of Scott having a great time up in Oxpatch last Saturday with the wife and kids is not much of a surprise here at Slabbed. In fact Biloxi Blues was kind enough to give us an almost real time report of the Walker family sighting at the game.

Still in all the farewell tour is beginning to wear on those observers that are paying attention, so Weidie’s blog post last Saturday evening complete with a pic of Scott and family enjoying the game, coming on the heels of receiving a health related extension of time to report is getting a fair amount of attention. For all of his health problems Scott is doing good running short races.

The bottom line is Scott will be a free man until December 1st so there should be more pictures popping up before then, like the one Slabbed featured from Thanksgiving 2013.

Provided the current prison reporting date of December 1st holds, Scott will have remained free almost 9 months after his guilty plea and 13 months after the indictments were originally handed down. In the scheme of things these are not extraordinary time periods but Scott is doing his best to make it seem like forever to the public.  Incorrigible is the operative word.

Photo edited at the request of Trinity Walker.

In a respect, when you’ve seen one set of sentencing letters you’ve seen them all folks in that most everyone had done a good deed or two in their lifetimes as well as positively impacting other lives. With that said, the vast majority of the letters written on behalf of Scott Walker fell along those lines including the one from Walker’s wife Trinity, who wrote a heartfelt letter to Judge Starrett not on Scott’s behalf, “but on behalf of our children”.

She then recounted how she came to know Scott in 2010 as “the hardest working, most driven man I have ever known.” She admits that, “He is a “yes man,” who trusts everyone, which has proven to not always be the right answer…”

.Grandma used to say to me, “just because someone smiles in your face & pats you on the back, doesn’t mean he’s your friend.” So True!

I mention this because often sentencing letters are truly revealing of a person’s character and it is clear that Scott Walker has many fans here on the coast. Todd Trenchard, Executive Director of the Bacot McCarty Foundation and recipient of a taxpayer funded booze cruise wrote this about Walker: END_OF_DOCUMENT_TOKEN_TO_BE_REPLACED

The many times over the past 7 years or so that I have communicated with a well placed source, invariably the information imparted is also accompanied by restrictions on its use and disclosure of the source. It has occurred to me that I disclose much less about these people, than say the AP, who will describe a source like “someone in government that requested anonymity because they were not authorized to speak with the media”.  My description would probably include a janitor and a homeless drunk but Slabbed has built up enough street credibility that we can get by with that.  Even better it help protect the folks that are sharing information.  It is no secret that in the Yenni Building at least one and I think more dragnets have been run trying to figure out the identity of the famous (infamous) Wino of Lafayette Square so I understand the restrictions and manage to thrive figuring ways around them without shutting off the information flow.

All that said I’ll report now that outdoor living during the Polar Vortex was too much, even for the indefatigable Wino, and she died last Winter. Now a moment of silence:

I buried my lead to make a point but from Slabbed’s DMR coverage I would posit it is safe for the reader to assume Slabbed has a kick ass source or two or three on the topic.  These folks are located from Jackson and points south all the way to the Mississippi sound and some of what you’ll read here is reflected in what they have told me and what I continue to tell hear.

First off the bad news as it regards the DMR Foundation Boats. END_OF_DOCUMENT_TOKEN_TO_BE_REPLACED

Judge Starrett’s order hit PACER late this morning and it contains the ground rules. I have read the letters and will spend some time thinking about how to present them in the post that is coming. I detected two very newsworthy items in my first pass. Stay tuned. 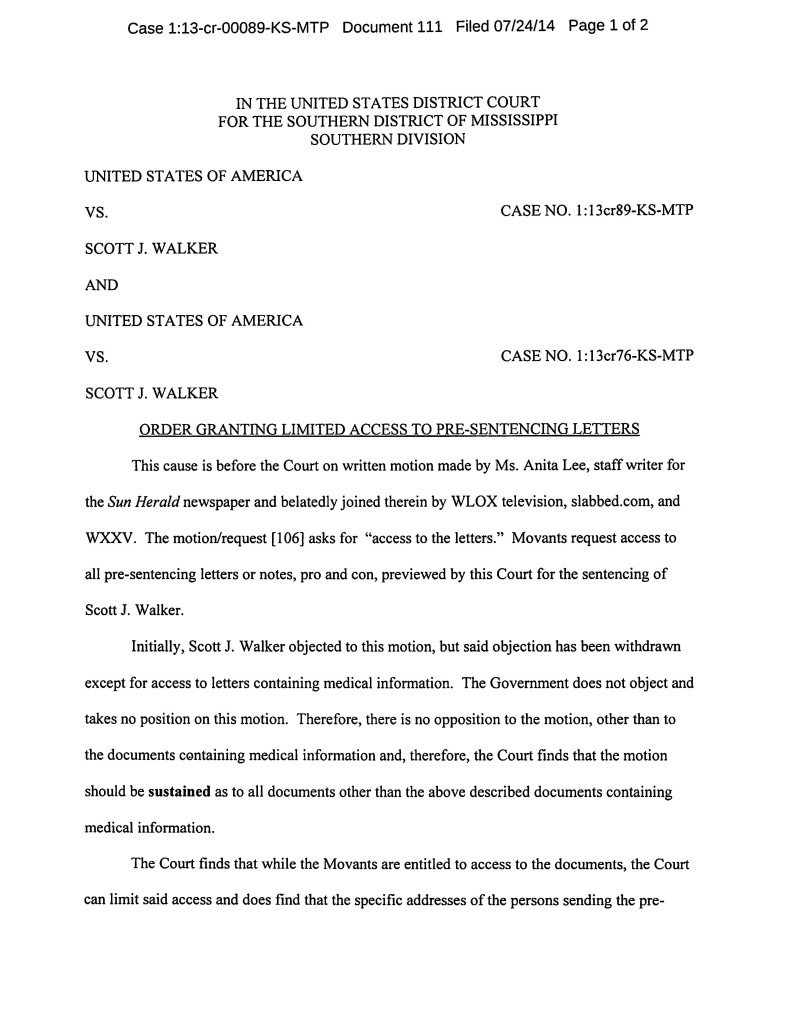 We all owe a debt of gratitude to Anita Lee for trailblazing this issue. After Scott Walker was sentenced, Anita along with other interested members of the media, including myself, huddled with Team Walker, the US Attorney and Judge Starrett. Subject to certain conditions Judge Starrett granted us access to the Scott Walker sentencing letters. I’ll absolutely have more on this a bit later.

Here is the minute entry on PACER:

I will certainly be there. I hear a few members of the environmental community may also come to observe.

Next up a comment bump on last nights regular Bay St Louis City Council meeting and death by Deferred Revenue:

It will be interesting to know what the outcome was after the council went into executive session last night to discuss Mr. Kolf’s lies to them.

He should be dismissed immediately. The council should take the city back and pull all responsibility away from the mayor.

It is time for the council to take this opportunity and be responsible to the people of Bay St. Louis.

Speaking of that I have this from the Seacoast Echo’s Dwayne Bremer on Twitter: END_OF_DOCUMENT_TOKEN_TO_BE_REPLACED

That post title is a mouthful folks. Let’s begin with Scott Walker as his lawyer filed a motion to keep Walker’s sentencing letters off the record.

Judge Starrett is construing motions from letters that Anita sent the court asking for access to the sentencing letters. The variations in how sentencing letters are handled vary across and within the various Federal Court districts and that variation is somewhat disconcerting. In Louisiana Eastern, sentencing letters are made available via PACER as a general rule without anyone in the media having to file motions to intervene and having to ask for them.  Here in Mississippi, Judge Ozerden released Roger and Sharon Ladner’s sentencing letters in the same way per my inspection of the docket in that case.

Last month at Bill Walker’s sentencing Judge Starrett mentioned that the jurisprudence in the area of sentencing letter release was well settled.  Walker’s motion in opposition to Anita’s request for the release of the letters prominently mentioned the fact that Judge William Steele over in Mobile withheld the letters in USA v Byrd, where the former Jackson County Sheriff got off very light, some would say “Judge Ginger light” and that is saying something.  I’m not yet convinced Steele had anything right in his ruling on the Byrd letters.

If I had to argue against one point Arthur Madden made in the Scott Walker motion, END_OF_DOCUMENT_TOKEN_TO_BE_REPLACED

First up a lovely oldie:

So here I am working in the field thinking it would be a slow day on the blog. I reckon there is no such thing as a slow day so here is today’s first nugget.

Wanna live on the beach next to Joe Cloyd? Now is your chance folks because Scott and Trinty Walker have their place for sale for the bargain basement price of $1,250,000.

Word I get is Trinity will be moving closer to the locale where they expect Scott will be incarcerated.