Mainly that pesky Horn report per Jim’s article, a document that Slabbed revealed just yesterday was so closely held as to be forever banished to the crypt at DOJ HQ in Washington DC.

That said there are a few of us that got a special visit back in the day and today we form a survivors network of sort. You see folks it wasn’t just the thumbscrews but more so being forced to watch the entire run of Dusty’s Trail multiple times until we broke that resulted in the PTSD. In any event none of us are talking as the memories are simply too painful to recount.

Meantime the Horn report remains sealed up, stored deep in the crypt located in the basement of HQ in Washington DC. As for Slabbed our lips are forever sealed

Gotta given Gordon Russell and his gang over at the Advocate props for nabbing the OPR report.

In other news, to update a story first reported on by Slabbed New Media:

Either you know David or you don’t. If you’re in the media and don’t know David then you’ve been hiding under a big rock. This I know, Muspench would approve. 🙂 Take it away David. 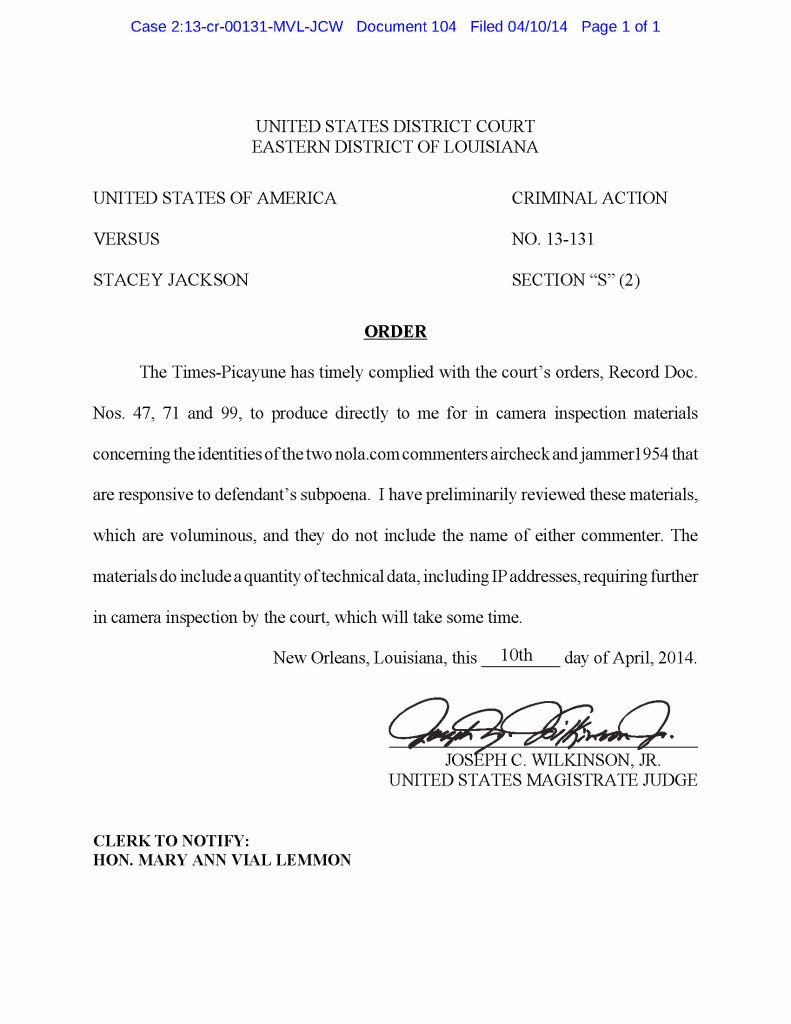 Gordon writes a pretty good story recapping the order and then some. But it was the bottom of the story that I thought was most interesting and true based on my experience here at Slabbed: END_OF_DOCUMENT_TOKEN_TO_BE_REPLACED

I’ll be honest and say after reading Adelson’s piece, which focused on USA v Howard, that I was left with conflicted emotions and thoughts. The bottom line is barring some sort of miracle the Advocate’s Gordon Russell and John Simerman will be testifying about their meetings with FBI agents.

To me, to understand Gibbens is to understand the snake pit that was the NOLA US Attorney’s office, which saw way more than its fair share of top shelf talent cycle through the doors for over a decade Gibbens being a prime example.  He’s hooked up with the right people to insure he remains at the epicenter of the high-end NOLA criminal defense scene.

NOLA.com could appeal but it would be a waste of money IMHO. Click the pic below the jump to nab Judge Lemmon’s 9 page order and reasons. END_OF_DOCUMENT_TOKEN_TO_BE_REPLACED

What Ninja lawyer wants Ninja Lawyer is gonna get:

I don’t blame you. @GordonRussell1: Not too psyched about this: http://t.co/4OQV7TeWXM Just got served subpoena by US marshal.

This in turn explains why Slabbed will continue to rely on janitors and other low level sources, including the gutter for our muck raking, which is still done the old fashioned way. How about some lovely music:

Pop the popcorn, enjoy the show and stay Slabbed.

Those of you following the DMR Investigation on a more personal level know Matt. I stayed as far away from the guy as I could in favor of raking my muck the old fashioned way. Why? Because at the end of this if the Government prosecution of the Walkers ends up FUBAR I’m no where near ground zero. Following is the worst that can happen when accused murderers for an organized crime ring seize the ol’ playing on the internet life ring:

Here in the 5th Circuit each and every one of them media guys mentioned above, as good as they are at their craft, can be hauled into court and made to spill their guts as there is no shield in the 5th Circuit for journalists in criminal matters. Here is the latest folks and it makes me sick to my stomach:

As for me, I’m still staying as far away from Matt as I can.

This is the cutting edge of media law right here folks and Slabbed correctly predicted what Magistrate Wilkinson would do in the circumstances.

Full docket text for document 47:
ORDER AND REASONS ON MOTION of The Times-Picayune to Quash, Record Doc. No. 42. IT IS ORDERED that the motion is DENIED IN PART insofar as it requests that the subpoena be quashed in its entirety such that no production of any kind might be required. IT IS FURTHER ORDERED, however, that the motion is GRANTED IN PART, but only in that the subpoena is modified as follows. As issued, the subpoena required production of the requested information by The Times-Picayune directly to defense counsel at his office on February 3, 2014. Record Doc. No. 41. The “Place for Production” and “Date for Production” provisions of the subpoena are hereby modified to require instead that The Times-Picayune must produce, no later than February 19, 2014 at 5:00 p.m., all information responsive to the subpoena directly to me in my chambers for my in camera review. If I determine based upon my in camera review that aircheck and jammer1954 are citizens without connection to the prosecution, their First Amendment right to anonymous speech will outweigh the Due Process rights of the defendant and no further disclosure, production or inspection of the information will be permitted. Otherwise, whether and, if so, how and when the responsive information may be made available to the parties for inspection will be established by further order of the court. Signed by Magistrate Judge Joseph C. Wilkinson, Jr on 2/14/14. (tbl)

How did Slabbed know what the Magistrate would do? (WWMD?) Before I get to that here is the order and reasons for those that want to see a Magistrate Judge being consistent in how he applies the law.

I guess I gave away the answer above.  Slabbed has followed Magistrate Wilkinson since END_OF_DOCUMENT_TOKEN_TO_BE_REPLACED