It all started back on the 4th with the folks at the Clarion Ledger:

In the three years since Director Trudy Fisher’s resignation, federal investigators have looked into DEQ’s activities under her leadership. The probe looks at contracts granted by DEQ in an attempt to determine whether Fisher personally benefited from them, according to multiple sources with knowledge of the investigation, including several people who have been interviewed by the FBI.

Under Fisher, private contractor and attorney Amy Whitten reaped nearly $2 million in DEQ contracts, either directly with the agency or through subcontracts with law firm Balch & Bingham. Whitten, a well-known state contractor, had worked with a number of agencies and secured four previous DEQ contracts before Fisher took over the agency.

The link above that Slabbed put out on Twitter was still warm when the Sun Herald picked up Wolfe’s story on Wednesday by then it had really captured the attention of many folks including here. Then we got the wet blanket that lie under the salacious headline:

Amy Whitten, a Mississippi attorney who received a subcontract with the state Department of Environmental Quality in the aftermath of the Deepwater Horizon oil disaster, shared her Ridgeland office address with two companies that also gained contracts related to the spill.

One of the companies, Covington Civil and Environmental Engineering, received tens of millions of dollars in contracts related to the April 2010 BP oil spill. The other company, Adaptive Management Services, received a small contract before eventually subcontracting under Covington.

It sounds juicy and salacious but further down the story: END_OF_DOCUMENT_TOKEN_TO_BE_REPLACED

And there has been a lot happen since I descended into the salt mine. I appreciated the continued commentary on the situation in the Bay from the commenting community here. Last night there was a City Council meeting we’ll need to catch up on but first some of what else has happened here on the coast over the past 10 days or so first up in Hancock County.

And we have us a Mayor’s race in the Bay!

Regarding the above I recommend following the money on the drug testing to gain a greater understanding of Hancock County’s child welfare industrial complex.

Next up Congressman Steven Palazzo is still hiding from his constituents: END_OF_DOCUMENT_TOKEN_TO_BE_REPLACED

Update:
I have been able to clarify that chatter from last night. Yesterday Scott Walker did indeed go to Ocean Springs City Hall and pick up qualifying papers for municipal office but he has has not filed any papers on his own behalf to qualify. This bears keeping an eye on to see what develops.

What else can you say folks except Ol’ “Sly” and the Wifey are back in the news:

Vital Background here in one of the top five most trafficked Slabbed posts of 2016.

Hat Tip to a sharp eyed reader who saw that Probation and Parole is on the job.

As the battle between Scott Walker and his neighbors continues…. 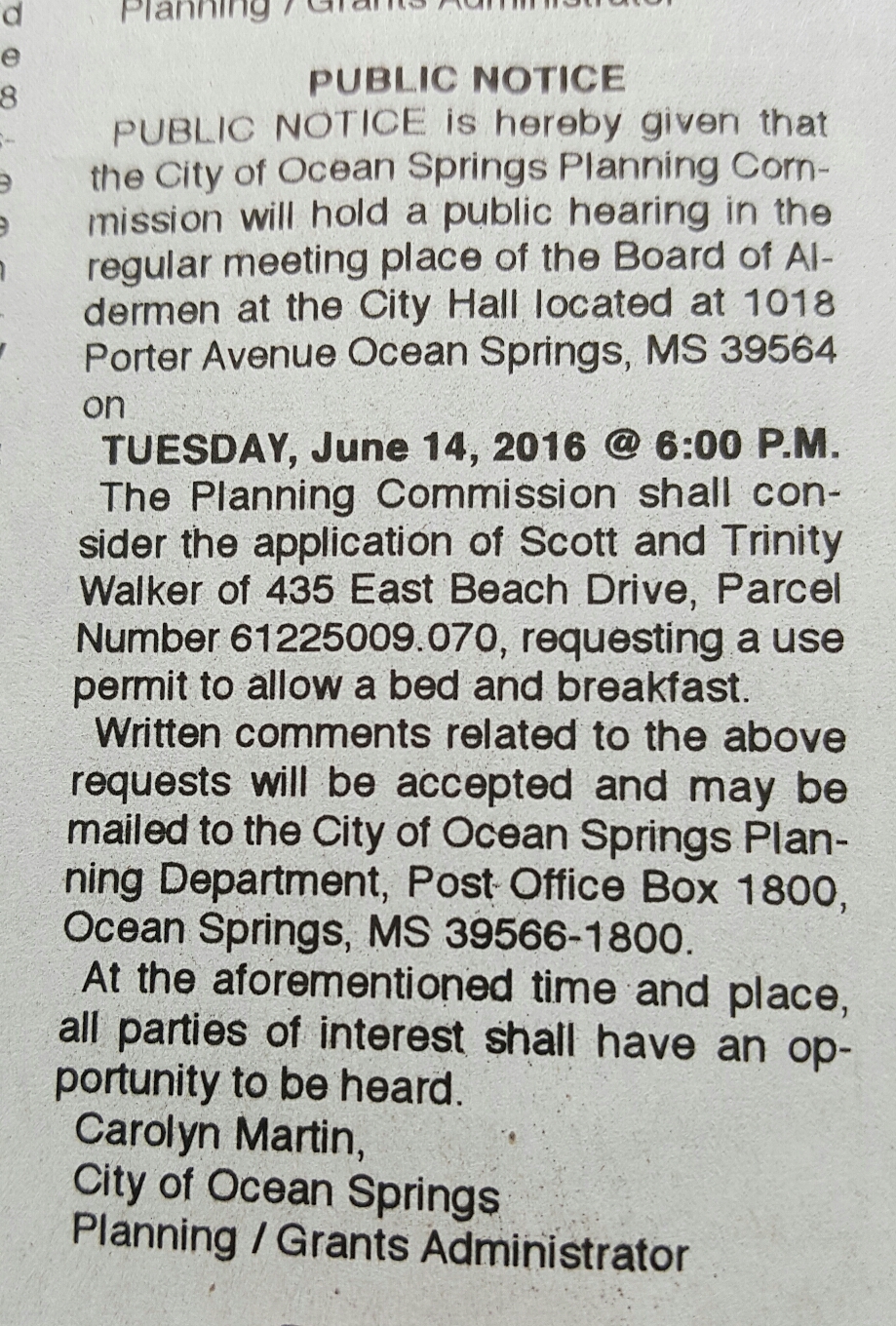 But first I’d like to welcome you folks in the Bulldog Nation that are salivating at the prospect of the another NCAA hammer coming at Ole Miss football from the Six Pack Speak forum before disappointing you with news that I have confirmed the amount of money the Black Spring Break Revelers told a “Curious Joe” they paid to rent the property which was $750.

I also know the identity of the owner of the vehicle parked in the Walkers driveway who I will not disclose beyond saying the vehicle is registered to what appears from Facebook to be a nice, middle age lady from Moorhead, Mississippi that would be at the right age to have college age child(ren) who would pay $750 for a weekend of fun and frolic at 435 East Beach. The 2016 Ole Miss roster does not list any player from Moorhead, Mississippi.

But the funny part about all this is SRHS Watch’s comment was prescient, the funny being Walker subsequently using the talking point in his interview with Warren Kulo at the Mississippi Press which now leads here:

A couple of other tidbits. I am told reliably by a source familiar with the operations of Ocean Springs City Hall that a prominent local Citizen that is invested in the East Beach neighborhood has threatened legal action against the City if the Walker’s unlicensed VRBO enterprise is not reigned in. The same source tells me the neighborhood has organized so as to better respond should short term renters again appear 435 East Beach.

And now a couple of comments from the Six Pack Speak Forums: END_OF_DOCUMENT_TOKEN_TO_BE_REPLACED

Based on the reporting from a few weeks back that the Walkers were told not to rent their place out it will be interesting to see where this latest development leads to but I am hearing from multiple sources with knowledge of the neighborhood that those folks who reside in this exclusive neighborhood are not enthralled with this latest turn of events.

But there are property taxes to pay on the place to go along with the car tag for the new Mercedes Sedan Scott drives these days and in the VRBO market there is only one color: Green.

I suspect we’ll be hearing more about this latest turn of events. Stay tuned.

An astute observer sent me a link for the related VRBO listing so I guess the Walkers decided not to wait for any City permits as such formalities are evidently for chumps in Ocean Springs. END_OF_DOCUMENT_TOKEN_TO_BE_REPLACED