I’ve personally never seen anything like this in my 50 plus years here in Mississippi. Back during the tropical storm people gathered at Blaylock Park in Wiggins and Slabbed was there:

We have us a tropical storm and a peaceful #BLM protest here in Wiggins this afternoon at Blaylock Park. There are protesters at intersection of 1st and Pine Streets as well. Blustery day with light rain right now. pic.twitter.com/kdlrkvh2ge

And despite the wind and rain people continued to trick in after the official start time:

The group up here was so peaceful I did not notice a single law enforcement officer among those gathered. Then again the impetus for this rally came from the local business community as did last Friday evening’s march in Bay St Louis:

Knowing the difference is the entirety of the context behind the last night’s Bay Waveland School District Trustee discussion and vote at the Bay City Council meeting. First we have this:

Paul’s rendition of the events involving last night’s City Council meeting is spot on. Councilman Reed did read such a letter. My thought on that subject comport to those of Alice and Michelle. I had another councilman bring up receiving a nasty gram or two on this subject just like when Mrs. Arnold was appointed last July with Councilman Seal bringing up such an instance. Nasty grams and school board appointments have that time honored pattern in the Bay. So much effort for so little per diem indeed.

Folks, Hancock County got to watch the Courtney Thomas library drama unfold last year, so predicting a bad spinoff show for this year’s spring season for the school board seat involving Momma was a no brainer as was predicting it’s cancellation. That said it takes both talent and dedication to alienate both the Hancock County Board of Supervisors and the Mayor of the County’s largest City.

In any event, for all the posturing we saw at last night’s meeting, the City Council members that were very critical of the Mayor’s choice of Ms. Lathrop didn’t seem to want to discuss any of the Mayor’s reasons for letting Ms. Thomas go after two years of service and replacing her with Ms. Lathrop. I reckon it was easier to play the race card than to discuss actual issues. Voting against Ms. Lathrop’s appointment were Councilmen Reed and Zimmerman with Councilman Seal attempting to have it both ways.

Finally, I’ll tackle the reason why the Bay Waveland School Board maintained diversity with Ms. Lathrop’s appointment despite the fact she replaces an African American since it is a hot potato. END_OF_DOCUMENT_TOKEN_TO_BE_REPLACED 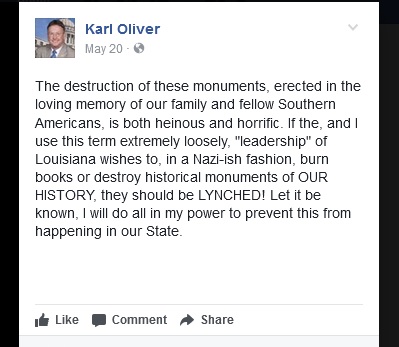 I was asked by a reader to highlight the following:

The arrest raises disturbing implications so I understand the interest as even Mr. Meredith apparently hates his own statue. No doubt the message conveyed by the perpetrators is one of hate, but is it a crime? Apparently AG Holder thinks so as we have a federal indictment.

I am uncomfortable with the constitutional implications. Fire away your thoughts in comments.

Folks there is a story I’ve been holding onto for several days now that is of the compelling variety even though it is someone elses small town news. Simply put, one doesn’t hear much about the doings in a small town in southern Nova Scotia anywhere in the States and since the Canadian people are rumored to be tolerant souls the topic fits on Slabbed, especially with AROD lurking about to lend his insight to the subject matter of racism and abuse of civil rights under the color of law. So lets start by highlighting Timothy Gillespie’s story from last week, Shelburne mayor blinks, charges dropped on bullying victim.

The highly anticipated trial of a man accused by Shelburne mayor Alan Delaney of causing a disturbance at Town Hall was canceled at the last moment Wednesday as the crown prosecutor admitted that there was little chance of a conviction.

The trial is part of what Keith Jacklin says is years of persecution by the Town and two years of out-and-out bullying by Delaney. The most egregious episode, says Jacklin, a black loyalist descendant, is when he visited mayor Delaney at his home and the mayor told him to “go back into the woods where you belong, you half-bred nigger.”

Normally such things merit a defamation suit or two END_OF_DOCUMENT_TOKEN_TO_BE_REPLACED

One day (maybe) this country will have an honest discussion about racism.

Somehow ol’ DuKKKe  never figured out how to bamboozle anyone else besides the folks that elected him to the legislature and almost Louisiana Gov. Looks like he’ll be coming home to his peeps after being arrested in Germany. Methinks he’ll fit right in with Diaper Dave, Bucktown’s other gift to the political world.

How telling that Mississippians would have to leave the state to find a newspaper pundit that is not high on the fumes from Boss Hogg’s rear end to accurately tell the story of Boss Hogg’s recent attempt to revise Mississippi’s sad civil rights history. Jarvis DeBerry is the man and once again he sets the record (and poor ol’ Sid Salter) straight as only Jarvis can, citing facts instead of political talking points. (Hat Tip the Opinionated Catholic via Twitter)

Folks we’re laying off police, teachers and other government employees in record numbers but now that Boss Hogg stuck his foot in his mouth attempting to revise Mississippi’s sad civil rights history, he now suddenly thinks its time we spent  millions of dollars we don’t have on a civil rights museum, no doubt to be used a cheap prop for his upcoming Presidential bid.  Heck, who knows, maybe they’ll feature some of his kin folks in the Yazoo County cross burning exhibit. Either that or he already has a relative picked out to handle the bricks and mortar.