A few weeks ago the parties to the Bay Tech civil suit settled their differences and the case was dismissed. Terms of the settlement were not disclosed. Those wondering exactly what I am talking about should click here generally and here for specifics on the use of the Bay-Waveland School District to facilitate a real estate transactions that benefited private individuals.

There is one last document in this case that I have known about for over two years that I hope to present to Slabbed’s readers so we can complete the timeline of this specious transaction, which included the Bay-Waveland School District spending almost $100,000 on architectural fees designing a building the Superintendent and School Board knew they would never build. This whole deal completely reeks on several levels folks.

Next Tuesday, the voters in Waveland will be able weigh in with their thoughts on this matter.

Today Magistrate Robert Walker denied the request of Douglas Handshoe for Slabbed New Media to quash certain aspects of the 30(b)(6) deposition of Magnolia Group scheduled for late April, 2014. In denying the Handshoe motion Magistrate Walker ruled the shield for journalists promulgated by In Re Selcraig did not extent to third parties such as the Magnolia Group or its owner Bill Washburn.

“While I’m disappointed in the Magistrate’s decision it was well reasoned and I accept the ruling”, said Handshoe, who noted he filed the Motion to Quash to honor promises he made Bill Washburn in late 2012 to keep certain aspects of our communications off the record. “Trust is the only currency that spends well in cultivating and maintaining informational sources” noted Handshoe, who opined that the written communications in question with Bill Washburn of Magnolia Group will likely be of no use to the parties to the litigation.

“There has been significant speculation as to the identity of the tipster which resulted in the series of posts which exposed the questionable purchase of the Bay Tech Building by the Bay Waveland School District from politically connected local businessmen” said Handshoe who added that, “the tipster’s identity will remain a closely held trade secret of Slabbed New Media.”

Finally Handshoe noted that the legal question of whether his website qualifies as an authoritative journalistic informational source now appears well settled.  “While numerous of my colleagues in the blogsphere correctly point out that anyone maintaining a contemporaneous journal is correctly termed a journalist, the courts as a whole have been slow to recognize that concept on a macro basis.  I am gratified to see the Slabbed New Media website appears to have made the proverbial cut in the eyes of the local judiciary.”

A PDF of Magistrate Walker’s order and reasons can be read by clicking here. 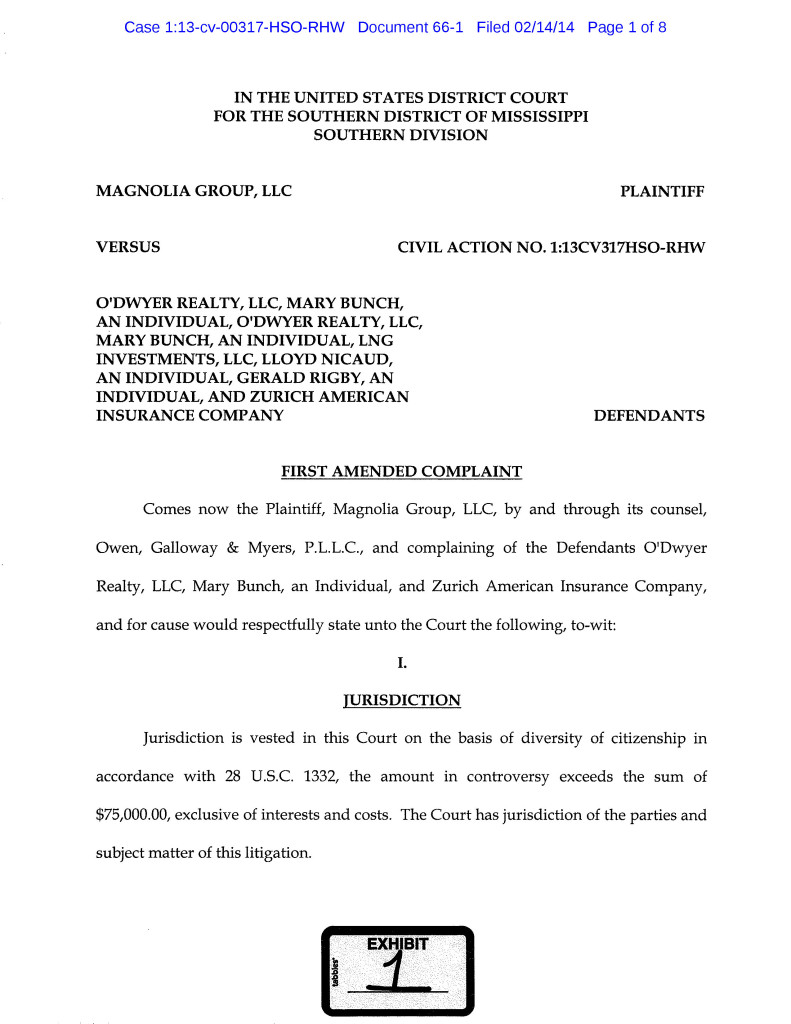 Today, Slabbed New Media filed a Motion to Quash and/or for Protective Order in the civil suit styled Magnolia Group v O’Dwyer Realty et al in the United States District Court for the Southern District of Mississippi. In the Motion and Memorandum of law in support, Sole Owner/Publisher of Slabbed New Media, Douglas Handshoe argued that certain discovery requests were being made for materials covered by the qualified reporter’s privilege applicable in the United States 5th Circuit.

“Slabbed New Media believes that off record communications should remain exactly that”, said Handshoe, who’s website is locally renowned for its coverage of the massive political corruption scandal in Jefferson Parish, Louisiana which included bribery and money laundering schemes involving former Parish President Aaron Broussard and certain contractors for the Parish of Jefferson and other prosecutions which collapsed under the weight of the US Attorney Commenting Scandal.

“Trust is the only currency that is readily tradable in the field of investigative journalism. Sources take massive amounts of personal risk to leak information on public wrongdoing to investigative journalists, such no doubt part of the reason the US Fifth Circuit Court of Appeals created the qualified privilege for journalists.”, opined Handshoe. ”It is my hope to return to reporting the events of the Bay Tech case, instead of participating in discovery fights in the case itself.” We now have both the Plaintiff joining certain of the Defendants serving subpoenas on the Mississippi Real Estate Commission. Vital background on the suit itself can be found generally here and specifically here.