It looks like Team Bull may have stiffed the folks at Baker Donelson for big money defending Bull against the Baldwins but first a song:

You lifers know where to look but for those catching up, click generally here and specifically here for Slabbed’s prior coverage of this never ending saga. Click the pic to nab the partially sealed complaint for damages against Patrick Smith and others including entities owned at least partially by Bull Durham himself. 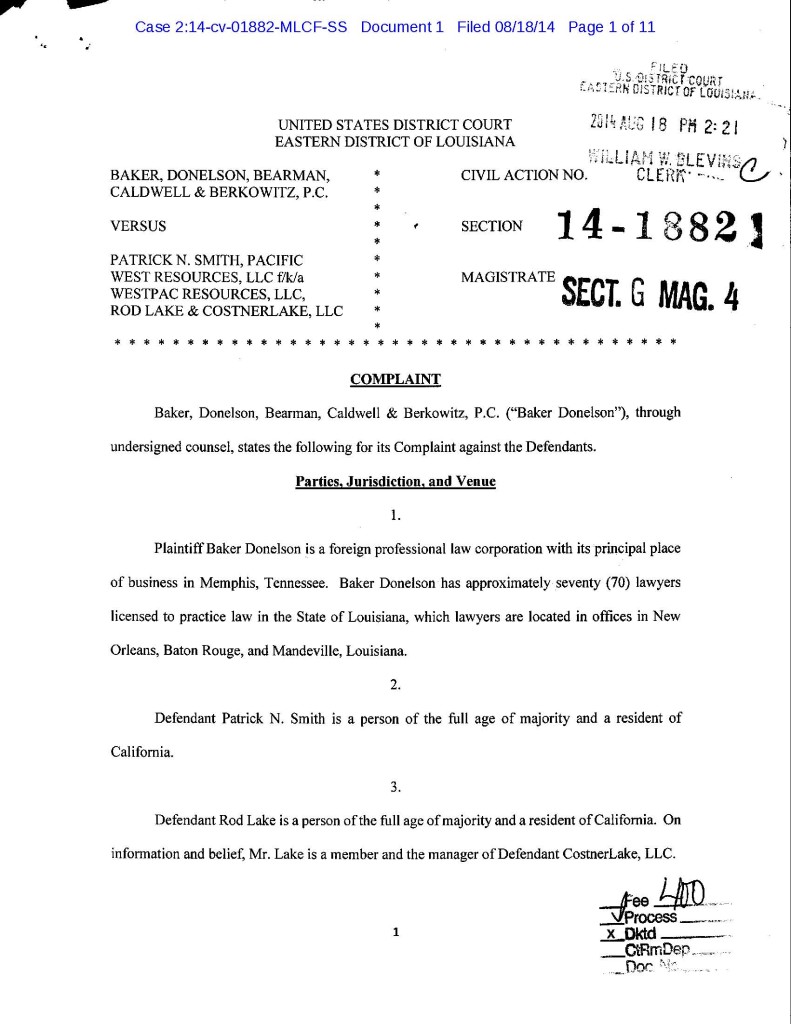 Folks in today’s update of the trial in Judge Feldman’s courtroom Bull Durham was on the stand last week and me thinks the pressure is getting to Costner, who could not read his testimony from a script like he did before Congress back in 2010. Here are a few snippets from 2 AP stories filed on the topic the the first of which detailed Bull’s testimony from last Thursday:

Actor Kevin Costner says he was heartbroken as he watched millions of gallons of oil spew into the Gulf of Mexico in 2010 and that he headed to New Orleans to see whether cleanup devices he helped develop could aid the recovery effort. Costner, who has been sued in a multimillion-dollar business dispute involving the devices, told jurors he was nervous. “My name is at stake,” he said.

Indeed it is as we’d all be disappointed if Bull is perceived as anything other than full of BS because that is all we saw back in 2010 when he showed up in this area like a fly on shit after the oil spill peddling useless centrifuge technology as a cure all for the Macondo well blowout. Bull has an interesting self concept of his contribution to combating the spill:

END_OF_DOCUMENT_TOKEN_TO_BE_REPLACED

As told by 1450 AM the Voice of Dothan Alabama. Welcome aboard guys. A short snippet from the must read account:

In a June 8 text from Smith to Ted Skokos, an investor who ultimately bought out Contogorous’ shares in OTS, Smith wrote: “We had an amazing meeting with BP. We r on line. I have a buyout agreement from the partner we want out being drafted today.”

On June 10, Metairie, La., attorney Daniel Grigsby drafted the contract between BP and OTS for 32 centrifuges.

Smith testified that the order from BP for centrifuges was still “conditional,” as of June 10. The next day, June 11, Contogorous effectively sold his shares in OTS in a document Grigsby drafted.

Today I’ll highlight some of the main stream media reporting on the trial and I am going to draw a sharp line and differentiate the reporting. First up though we need to examine what got everyone into Judge Feldman’s courtroom, one that is very plaintiff unfriendly if said plaintiff is an individual suing an insurance company.

Gullibility is a failure of social intelligence in which a person is easily tricked or manipulated into an ill-advised course of action. It is closely related to credulity, which is the tendency to believe unlikely propositions that are unsupported by evidence.

Classes of people especially vulnerable to exploitation due to gullibility include children, the elderly, and the developmentally disabled

I was tempted to sign into my wiki account and add the words “and National Media” because they made this lawsuit in a way back in 2010 by giving Costner huge amounts of free publicity when he showed up on the Gulf Coast like a fly circling a fresh cow pie after the oil spill. Notice I used the term “publicity” instead of “news” because the reporting was uncritical and 100% derived from controlled tests of Costner’s centrifuge technology, which were not previously commercially viable and was not used to any effect in the 2010 oil spill.

Simply put we had a ring side seat here at Slabbed when we highlighted the threatened lawsuit against Frank Levy on June 17, 2010 that was mentioned in so many of yesterday’s media reports on the civil suit. It was obvious to any local with half a brain this was the oil spill equivalent to a stock market pump and dump. But the media had stars in their eyes and made the Costner inspired scam “news” without a critical, second thought. END_OF_DOCUMENT_TOKEN_TO_BE_REPLACED

And Slabbed has literally covered this whole sorry affair of a bunch of washed up Hollywood actors cashing in on the worst environmental disaster in this nation’s history with hocus pocus technology that did nothing beyond stuff money into the pockets of self serving politicians from day 1.

The suit itself has finally crossed into the traditional media and frankly the reporting I’ve seen to this point is as devoid of useful information as the original real time reporting on Costner and his machine, which BP never used to fight the spill.

That said and in case there are media members that want to catch up this recently filed court doc is a great place to start along with Slabbed’s prior coverage.

Folks I’d like to take this opportunity to point out there was one media outlet covering the oil spill that called bullshit on Bull Durham and his useless oil-water separator real time as it was happening so while I take a victory lap, allow me to present the first of a raft of previously sealed documents in that star v star battle known as Baldwin et al  v Costner et al.  If you like a story where they are literally no good guys, only the bad and the ugly then this one is for you. Click the pic to nab the 2 page pdf: The existence of this agreement to make a deposit of $18,201,000 was concealed from plaintiffs until well over a month after the sale of their interests.4 These facts were disclosed to Contogouris in July, 2010 by John Houghtaling in an effort to induce Contogouris to loan Houghtaling $1 million to purchase a home located at 4717 St. Charles Avenue. That’s right folks, last year during the oil spill when the media was fawning all over Kevin Costner and his scam centrifuges, Slabbed was telling the real story of a shakedown that used our own Magnum JD as both front and promoter.

Today, Costner genuflects before Nunny’s campaign for Lite Gov and accepts the full load, going on camera for Nunny with his chin literally still glistening.  We’ll see in a few weeks how many weak minds fall for the fat asses propaganda.  Simply put a vote for Nunny is a vote for a lying sack of shit crook and it is just that simple.

Folks it is not a secret that Jeff Crouere’s girlfriend, Judge Martin Feldman does not have any fans on the Slabbed Editorial Board. That said even a broken clock is right two times a day and Feldman issued an order in the suit Continental Casualty v Magnum that I actually agree with. Even better Feldman nicely sums up the mess that is the multiple lawsuits involving Magnum and washed up actors Kevin Costner and Stephen Baldwin who are alleging Magnum defrauded them. Amazingly since we’ve picked up Magnum J.D. for broadcast on Slabbed, the Continental suit involves the second time we’ve highlighted a civil suit involving Mags and the legal concept of an insurers duty to defend. Unfortunately for Magnum first time around, Tom Porteous’ former law partner Robert Creely could not homecook the Hammer case in Magnum’s favor as ad hoc judge and was soundly reversed on appeal.

I’m not sure how this will unfold in the coming days as the suits are consolidated at the NOLA CDC but I can say we’ll have all the lowdown for you here on Slabbed.  (Calling Secret Agent 99….) I suspect if Continental pays for Magnum’s lawyers it will be after the case is over and I think when it is all said and done there is not much chance of that.

The order and reasons is below the folds.  Click the pic to get the 7 page PDF. END_OF_DOCUMENT_TOKEN_TO_BE_REPLACED

Just in case anyone was wondering how a relatively few individuals on Wall Street could almost single-handedly bankrupt the country and not a single person went to jail for any of the massive financial frauds that have come to light (we bailed them out instead) wonder no more as the good folks over at Zero Hedge compare and contrast campaign finance reports of Harry Reid with John Boehner pointing out both men are owned by corporate interests lock stock and barrel.

Now before the oil spill the politicians that were owned by big oil locally could be pretty open about that fact as Mary Landrieu’s career campaign finance reports indicate. I strongly suspect sight unseen Bobby Jindal got a bunch of oil and gas ca$h too as he got lots as a congressman.  After the spill it just wouldn’t look so good for any politician that was excoriating BP to take campaign ca$h from them but it seems as if there is always willing middle man to spread the wealth and into our narrative enter Magnum JD, his partner and their nonrefundable $1.115 million dollar contract with BP to provide advice on how to deal with state officials. Let’s follow the money and take a looksie at a partial list of the fundraisers ol’ Mags held around that time period: