Slabbed has learned that Tima Shumate, former head of the Mississippi DMR CIAP program, has been released from MDOC custody. Stay tuned to this developing story.

1. There is no truth to the speculation that Ms. Shumate’s release is in any way related to the Livingston Parish CIAP Investigation.

2. Ms. Shumate’s release was not politically motivated. Our state prisons are stuffed full of nonviolent offenders. In 2013 a law was passed that reduced the amount of time nonviolent offenders had to serve to 25% of the total sentence so that we could house more violent offenders. Shumate, based on when she took her plea, fell under the new law. If someone deserves the blame for this state of affairs it would be her lawyer Tim Holleman, who would be on the short list of people I’d go see if I got into serious criminal trouble. The bottom line is Ms. Shumate is being treated no differently than others similarly situated.

Since RFP did the work digging up the old links on Slabbed, a comment bump is in order as the FBI is now poking around a subject Slabbed first reported on a bit more than 2 years ago:

“Federal authorities have been looking into Madison County Tax Assessor Gerald Barber and his role in a Louisiana land deal that scored almost $3 million in profits for private citizens and a conservation group.

The lynchpin for the deal may have been an apparent inflated appraisal done by Barber’s firm, Barber & Mann Inc., that the U.S. inspector general called “noncompliant” and unreasonably priced in an audit.

DMR Scandal day 53: The bucks are beginning to stop.

This is hot off the press folks: 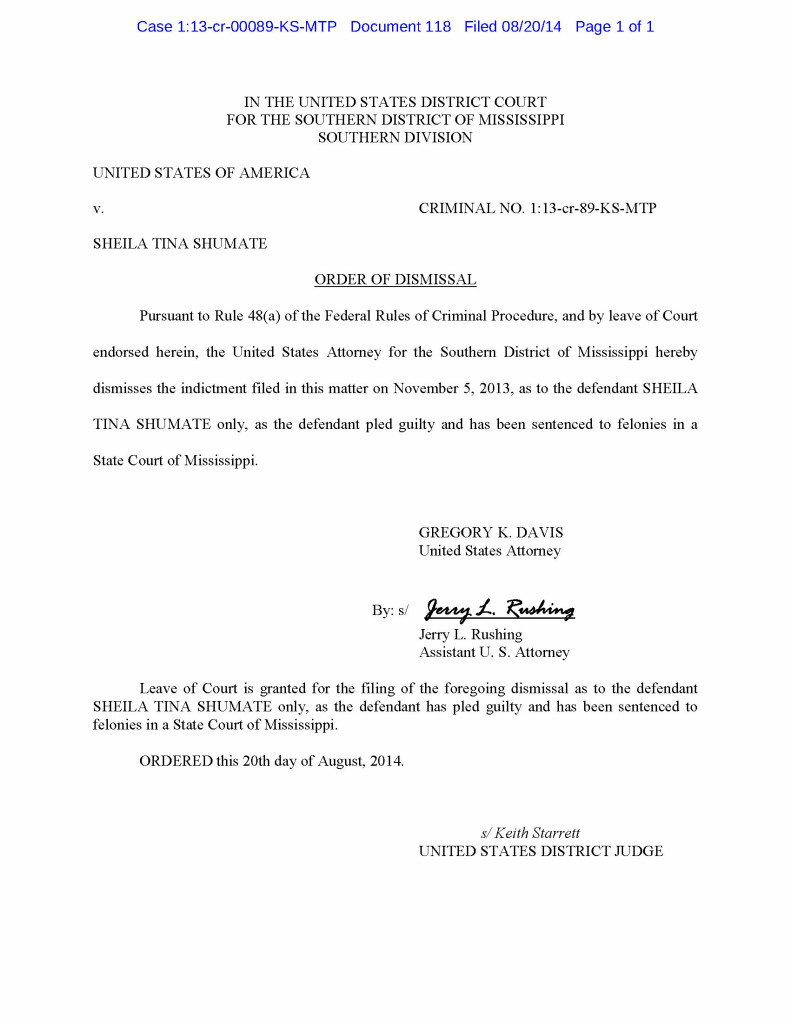 I’ll term these thoughts 1 and 1a in response to Eye Spy:

It is unusual for someone entering a guilty plea to immediately go into custody of MDOC let alone do it voluntarily yet that is exactly what Tina Shumate did last bad news Friday. With no activity on PACER and a looming late September trial date before Judge Keith Starrett this can only mean that when Ms. Shumate makes an appearance before the court she’ll be wearing prison orange and likely, shackles. Thought 1a from the old days and Dr. Demento: END_OF_DOCUMENT_TOKEN_TO_BE_REPLACED

2014 Coastal Legislative Reception on the Taxpayers

I have what I believe to be the documents to which Tim Holleman referred. END_OF_DOCUMENT_TOKEN_TO_BE_REPLACED

More precisely one thought on the information contained in Anita Lee’s story on same.

Shumate allegedly approached the Land Trust for the Mississippi Coastal Plain about buying the property. The Land Trust and Scott Walker signed a sales contract in April 2011.

Shumate’s attorney, Tim Holleman of Gulfport, who attended the plea hearing, said afterward that Shumate maintains her innocence. He noted that the government alleges Bill Walker “directed” her to approach the Land Trust, not that she conspired with the Walkers. But she is included in the conspiracy charge with the Walkers.

I seem to remember that a conspiracy could involve other acts. Shumate’s purchase of her parent’s property with Coastal Impact funds could be one such possible act the prosecutors would use. The Good Book appears to back this understanding.

It will be interesting to see if Shumate and Ziegler cave or take this into a courtroom.  Both have top notch legal representation.

Meantime the jackassery on the Jefferson Parish Council is hitting full tilt with the gang deciding the voters really do need to have a say so on this hospital deal: END_OF_DOCUMENT_TOKEN_TO_BE_REPLACED

Vital background via Anita Lee can be found here.

Walker had used the property in July 2008 as collateral on a $310,590 loan, which called for monthly payments of $2,775. The balance and all interest payments were due July 25, 2011, although the terms did allow for loan extension or modification.

Tattoo? I heard that word most from investment bankers doing M&A work a decade or so ago. Tatoos are not easily removed, especially those given a bank by a family member to induce the extension of credit to someone that is not otherwise creditworthy enough on their own to nab a $310,590 loan.