About a week ago Stacey Cato had a story for the Sea Coast Echo detailing a Federal lawsuit against Hancock County Justice Court Judge Jay Lagasse that I though was one for the ages. It has a little bit of everything from a nasty divorce involving a relative of Harrison County Sheriff Troy Peterson, who attempted to ear wig Chancellor Carter Bice on behalf of the young lady and allegations of sexual misconduct involving former Gulfport City Prosecutor Richard Smith and the Sheriff’s niece. Stacey’s story has people talking and for good reason as the allegations are salacious and the Plaintiff claims to have some pictures involving the former Gulfport City prosecutor and the young lady.

A Hancock County Justice Court judge is one of nearly a dozen public officials in two coastal counties who were recently named in a federal lawsuit which claims each played a crucial role in violating a Gulf Coast businessman’s civil rights.

The suit, filed in Gulfport, alleges corruption, collusion, and conspiracy among city, county and court officials in both Hancock and Harrison counties, as well as ethics violations by the prosecution and unauthorized practice of law.

The whole story is well worth a read, especially the part where Plaintiff Wooten details pictures he has of City prosecutors carrying on with the Plaintiff’s estranged wife.

I had to see the cases for myself so I did some digging on PACER and MEC to get the skinny. Normally when I see a Civil Rights lawsuit naming over 10 public officials my dubiety meter goes off the charts and that was the case with reading Wooten’s Federal Court complaint. But then I got to the allegations against Sheriff Peterson earwigging Chancellor Carter Bice and the fact that the state court divorce case record is largely sealed. Luckily a friend stopped by to help us out and I can verify that Stacey quoted Bice’s letter to Sheriff Peterson very accurately. Here is a snippet: END_OF_DOCUMENT_TOKEN_TO_BE_REPLACED

Early this month Judge Ozerden issued a ruling in the Marquar lawsuit against Bay St Louis, Mayor Mike Favre and Lonnie Falgout which dismissed the Marquar claims against Mike Favre and Lonnie Falgout in their official capacities as well as the punitive damages claims against the City. Since the denials to the motion to dismiss appear predicated on Marquar filing an amended complaint, to which more 12(b)6 Motions to Dismiss will certainly filed the case looks to be staying in its earliest stages for some time to come.

Margaret Baker over at the Sun Herald broke the news of the latest lawsuit filed against Moss Point Mayor Mario King yesterday. From the sound of it King must be hell on wheels. He’s evidently been that way for quite some time as this blast from the past shows:

Besides those I am told King has an arrest record in another City on the coast but I have not had a chance to chase that one down.

And then two weeks ago Tyler Carter at the Mississippi Press had King spitting and fighting in Biloxi: END_OF_DOCUMENT_TOKEN_TO_BE_REPLACED

The good word came down on Tuesday when Judge Ozerden ruled on a Rule 41 voluntary dismissal motion filed by Reed after he settled with the City of Diamondhead’s insurer. I frankly never understood why the private citizens were included by Reed in his Section 1983 lawsuit against the City and once that count was settled it opened the door for the Court to punt the entire case, which it did. Reed could in theory refile the libel action in Circuit Court but he’d be throwing good money after bad based on his federal court complaint. Slabbed’s archival post on this topic can be found here. Judge Ozerden’s order of dismissal is embedded below:

Moving right along since the archival post also covered the Marquar Section 1983 lawsuit against the City of Bay St Louis, Mike Favre and Lonnie Falgout I took a peek at the docket of that matter while I was on PACER. Motions to Dismiss were filed late last fall and there has not been a docket entry since. I suspect a ruling on those Motions will be forthcoming shortly.

The streets of Hancock County turned a bit meaner last month when former Sea Coast Echo Journalist Dwayne Bremer was sued in Federal Court along with a bevy of Diamondhead City Officials and community activists by former City Manager Clovis Reed. When I saw the news of the suit last Friday night my initial thought was sue Double D? Why in the hell sue Double D? Luckily for everyone I took a peek at the case via PACER and I found two things:

Moving right along its beginning to look like all the chatter about multiple victims coming forward against local contractor Keith Marquar is the accurate assessment while public speculation that Marquar’s first arrest was somehow retaliation for his Civil Suit against the City of Bay St Louis evaporates. Geoff Belcher did a very good job for the Echo here: END_OF_DOCUMENT_TOKEN_TO_BE_REPLACED

Did everyone catch that local businessman Keith Marquar was arrested back on the 24th by the Hancock County Sheriff’s office? When I was told about it I immediately checked the Echo’s website but had no luck because, online at least, the story was buried. Luckily a good Samaritan sent me the link to the most popular story on the Sea Coast Echo’s website and that despite the fact it never appeared on the front page of the website that I could tell.

Even more interesting is the social media chatter locally, with public opinion seemingly split with a healthy percentage of those commenting  thinking the arrest is retaliation against Marquar for filing a 42 U.S.C. Section 1983 lawsuit against the City of Bay St Louis, Mayor Mike Favre and former Councilman Lonnie Falgout. Such is a reasonable conclusion from reading Stacey Cato’s story because about two thirds of it rehashes Marquar’s civil suit against the City, which was filed last month in Federal court. The story also did not name the person who swore the complaint against Marquar, ostensibly because Don Bass of HCSO refused to name the lady, whose name did appear on Facebook.

Let’s imagine for a second that the Echo’s story were limited to Marquar’s arrest and included the name of his alleged victim. END_OF_DOCUMENT_TOKEN_TO_BE_REPLACED

Regarding this civil rights lawsuit against St Slammany Parish DA Walter Reed which Slabbed broke the Plaintiff’s Ex-Wife has spoken and despite having spoken to both the areas major newspapers it is not clear what she said:

Here is the salient snippet:

Crystal Magee’s version of events doesn’t necessarily contradict what her ex-husband claims in his suit. But her account suggests that it was a phone call from her to Washington Parish Sheriff Randy “Country” Seal’s office that led deputies to arrest her ex-husband in the first place.

DA Walter Reed did not have man arrested for talking to FBI, woman says ~ Heather Nolan

The ex-wife of an Arkansas man who claimed in a federal lawsuit that District Attorney Walter Reed and others had him arrested in Washington Parish as retaliation for providing information to the FBI says her ex-husband’s story is not true.

Excuse me while I take a victory lap folks.

So the story goes Magee provided information to the FBI concerning “Jerry Wayne” Cox, a Pentecostal Preacher who is friends with District Attorney Walter Reed, concerning property insurance claims made by Cox. Magee alleges he was warned not to return to Louisiana. Sure enough according to Magee, the next time he took a trip to Louisiana, several Sheriff’s deputies showed up at his aunt’s house, tased him into unconsciousness and arrested him. After the arrest, a press release was issued saying Magee was arrested for owing back child support payments. He was held in jail for 97 days, during which time he was denied bail under the pretext he was under a “DA Hold” put in place by Reed. This all sounds familiar folks.  Click the pic to score the 28 page PDF below: 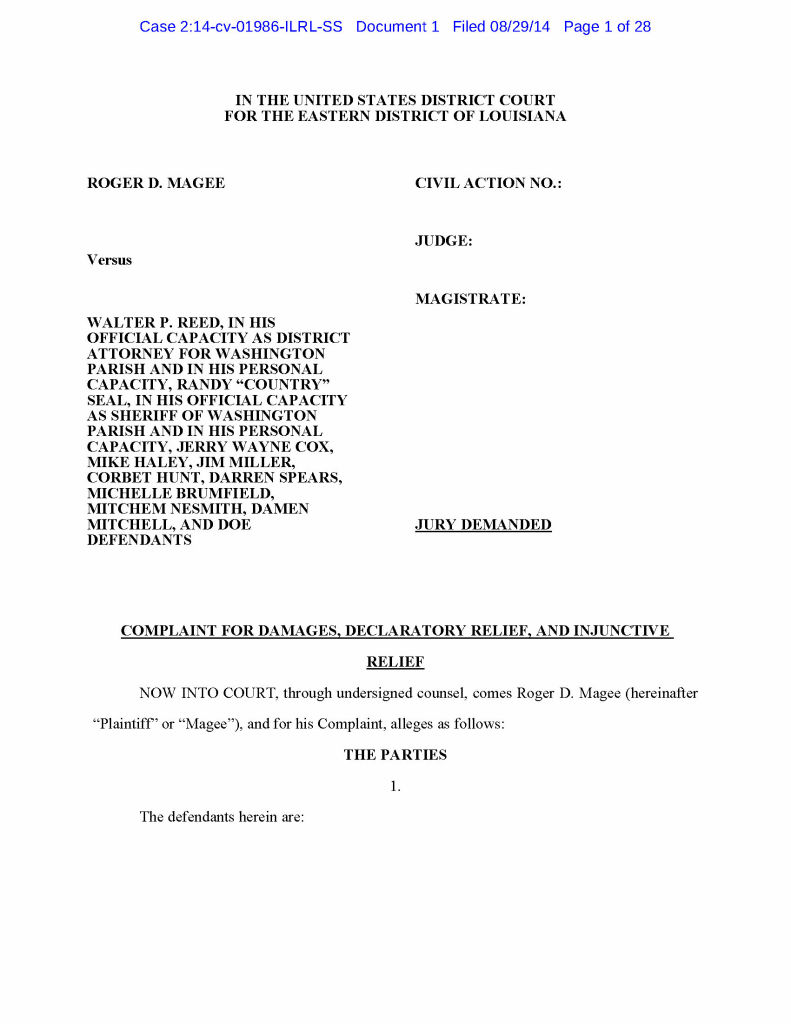