Folks, this Cowboy has been letting the totality of this mess sink in and then I read this comment on David Rossmiller’s blog that appears to sum things up well:

Except this post really sums up nothing about the real insurance issues or insurance law. Notice folks the implied threats against the Rigsby sisters, who by all accounts have had no involvement with the allegations against Scruggs. Most of what makes the so called insurance blogs these days is either old news, or half the story as Mr. Rossmiller himself pointed out in an rare moment of balanced commentary.

Well folks, here on the Mississippi Insurance Forum you’ll get just insurance talk; straight talk in fact, the kind that even a Cowboy can understand without a bunch of frue-frilly legal double talk. That’s probably why this Cowboy-farmer enjoys reading Mr. Chip Merlin’s insurance law blog. While the talking heads sit in places like New York City and Portland Oregon ole Chip was over New Orleans way at the Fifth Circuit Court of Appeals listening to the actual arguments. He presents an analysis of the recent Broussard arguments that you won’t find anywhere else and he makes it understandable. I highly recommend it.

In his reply to me there he summed up why you can’t trust a carpetbagger with this issue. Like in most cases it’s what these talking heads don’t tell you that matters most. Remember folks, State Farm threatened the engineers with termination because they found 2 instances of wind rather than flood in over 90 reports. Whadda you think the “boxing glove” hands people would do to a lawyer that doesn’t tote the company line? 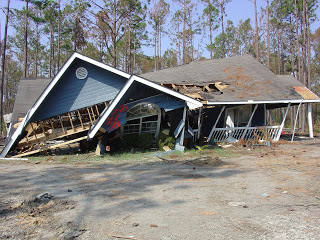 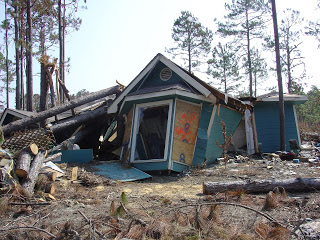 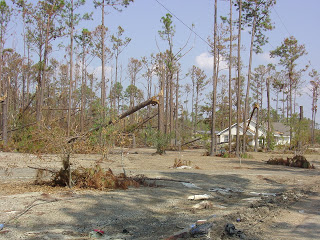 The right side of a hurricane is the wrong side to be on.

The weather wizards say “ground zero” is where the eye of a hurricane makes landfall.

Katrina’s eye passed just to the right of the Louisiana-Mississippi state line in Hancock County, Mississippi. We’re the orange spot on the map.

Of course, it didn’t take the wisdom of a wizard for any of us to figure out we were “ground zero”. All we had to do was take a look around and see nothing – “zero” – on the “ground” escaped Katrina’s wrath.

There’s still more nothing than something down here, rebuilding is stalled in the court, the economy is heading further south, and some are starting to wondering if we haven’t hit “Ground Zero for Hope”.

The right side of an insurance claim is the wrong side on after a hurricane.

When you purchase a homeowner’s policy with hurricane coverage, you expect the insurance provider to know what a hurricane is and what it does. If they don’t, you’d sure expect them to look it up and not make it up. Nonetheless, make it up appears to be exactly what some did.

All 82 Mississippi counties were included in the disaster declaration and 60% (49) were eligible for full federal disaster assistance. The insurance folks north of the Coast didn’t seem to have a problem understanding that water damage is covered if the wind blows a hole in your roof and water gets in your house.

Most of us didn’t even have a roof after Katrina blew through here. You would think, then, it wouldn’t be hard for the ones they sent down here to figure that water damage was done before the surge followed Katrina inland. Actually, it appears they did figure it out – probably right about the time they started trying to figure out ways to get by without paying when all that Katrina left behind was a slab.

The wrong side of a hurricane to be on is the one it takes a lawyer to make right.

Here are a few key definitions and concepts which might help those new to the insurance forum more rapidly understand the nature of the insurance problems our society faces. I will add more as time allows and hopefully we might combine them with other concepts.

One definition of insurance is a system to make large financial losses more affordable by pooling the risks of many individuals and business entities and transferring them to an insurance provider for a premium. More basically insurance is the process of the assumption of risk from one party to another for a fee.

The key to understanding insurance is the concept of risk assumption. In insurance terms risk is the chance of loss of that which is insured.

What is the role of insurance providers?

Insurance providers core function in society is that of helping to manage risk. Insurance plays a vital role in helping individuals and businesses prepare for and recover from the potentially devastating effects of a disaster such as a catastrophic hurricane or earthquake.

Insurance providers help society pre-pay for their risk needs. Catastrophic insurance providers have a special role in helping entire communities pre-pay for their disaster needs. Because their losses are more volatile the property/casualty insurers invest largely in high-quality liquid securities, which can be sold quickly to pay claims resulting from a major hurricane, earthquake or man-made disaster such as a terrorist attack.

Who are the leading providers?

Data from the National Association of Insurance Commissioners (NAIC) identifies the 10 leading writers of non-governmental property/casualty insurance by direct premiums written during the 2006 calendar year.

NAIC percentages were based on the U.S. total including territories before reinsurance transactions, excluding state funds.