If there was one lesson of the post Katrina rebuilding process that some places had to learn the hard way is that FEMA and Uncle Sam should not be confused for Santa Claus. Santa Claus is a role reserved for the local taxpayers and in this case Taxpayers/Utility ratepayers in the City of Bay St Louis that are stuck repaying what FEMA has termed excessive to the tune of $62,925 in engineering fees, an amount which is not chump change in small town Mississippi. There are a few things that I noticed researching this topic and it is at this point I must acknowledge the contribution of Lana Noonan of the Hancock Alliance for Good Government to this post as she went up to the City Hall complex and read several years worth of minutes that adds a great deal of color. Before we get to any of that we first check in with Cassandra Favre at the Sea Coast Echo and her telling of Tuesday a week ago’s Council meeting:

The Bay St. Louis City Council on Tuesday approved a motion to extend the $13 fee on utility billings through Dec. 31 to satisfy a payment to FEMA for the Beach Blvd. sewer, drainage and lift station project.

Mayor Mike Favre told the council that MEMA owes the city about $168,000 for the Rutherford Pier project.

“We write the check back to them and they give it back to FEMA,” Favre said.

Favre said the second appeal to FEMA for engineering costs reimbursement was denied in December 2016.

According to the second appeal analysis from FEMA, “on Sept. 10, 2014, FEMA”s Region IV Regional Administrator denied the applicant’s request for an additional $171,499 for engineering design costs. The RA noted that the $171,499 awarded for engineering fees is considerably more than the suggested percentage normally allowed for engineering and design services of above-average complexity.”

It is here that I recommend those interested in this topic should read or re-read Cassandra’s story but here is the bottom line for Bay Utility Ratepayers:

The council approved a motion – 5 to 1 – to extend the $13 utility charge until Dec. 31. Knoblock voted ‘no.’ Councilman Gene Hoffman was not in attendance Tuesday.

And here is where I give a hat tip to fiscal conservatives everywhere that oppose taxes (or in this case a user fee) on the grounds that once one is enacted it never seems to go away in favor of being forever re-purposed. For those in politics such “temporary” revenue streams must be like crack in its addictive capacity and that is certainly the case here with the $13 user fee, which was enacted because the previous Mayor had the City on the verge of defaulting on its Water and Sewer Bonds, a topic Slabbed Covered in detail back in 2014. Today it is being used to pay back half of the excessive engineering fees.

It should not lost on anyone that Mayor Fillingame and Clerk Paula Fairconnetue were notified last December the excessive fees had to be repaid and that bit of bad news was hidden from the City Council. Sources close to City Hall tell Slabbed that Mayor Favre was given the letter by a City employee on the first day he took office in July, 2017. Lana Noonan’s perusal of the City Council minutes indicate the second appeal was discussed behind closed doors in 2014 in an executive session despite the fact this issue would not qualify for a closed door discussion as litigation is not involved. It almost seems like this whole deal has been purposely hidden from the public for at least four years but certainly longer and I say that because the FEMA denial does not give the date they made their first re-payment demand.

Cassandra’s account was detailed but something was missing and it is here that Lana Noonan’s legwork is invaluable. In both appeals the City contended the fee was not excessive and the timeline provided by FEMA in their denial of the second appeal supports what I think is a very charitable telling of the events. Just like the $300 million dollar contract to Whitefish something stinks so now we present some documents, first up are all seven pages of the FEMA denial letter:

FEMA Letter by Slabbed on Scribd

Next up a picture from the official minutes of the Bay St Louis Council that brings all this into sharper focus: 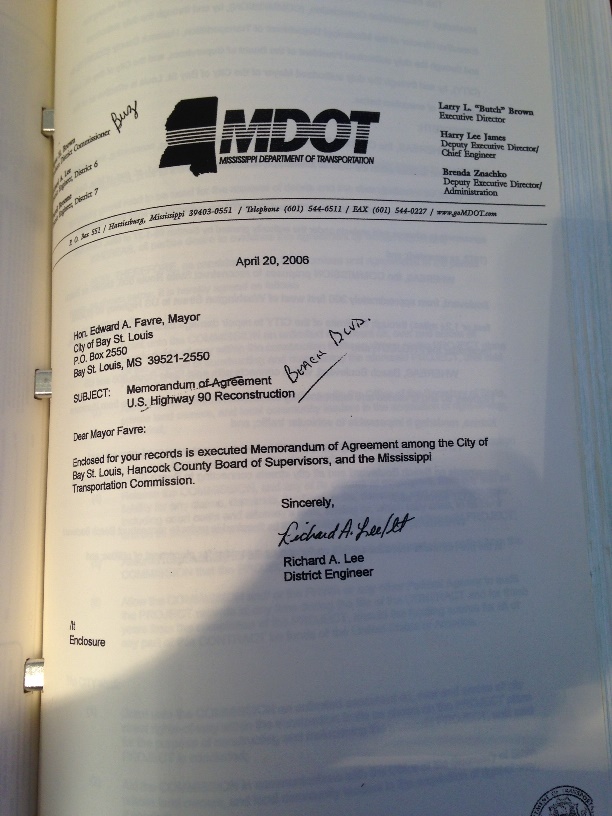 It is here that the City’s arguments in appeal begin to look very disingenuous. I quote from the FEMA December 2016 letter:

Indeed the first project worksheet (PW) in November 2005 was stand alone but as Lana’s picture above illustrates the City knew as early as April 2006 it would be doing a joint project on Beach Boulevard and per the FEMA letter the City knew by June 2006 the first PW would no longer be valid. NonetheLes, the City in September 2006 awards a contract to Compton Engineering based on the November 2005 PW instead of the new one they knew was coming based on the June 2006 correspondence with MDOT. Slabbed has been advised by a source with knowledge of City Hall operations circa 2006 that the person handling FEMA recovery for the Mayor Eddie Favre Administration was Les Fillingame. Fillinagme was assisted in that position by former City CAO Buz Olsen. The word “Buz” is even hand written on the April 2006 letter from MDOT.

At this point all we have is speculation. Was this Bay St Louis officials acting like FEMA was Santa Claus or something worse. I doubt we will find out the answer to that question but at the end of the day the ordinary folks in the Bay are the ones being stuck with the tab.

I suspect we will learn even more in comments so fire away folks.