Tuesday a week ago Slabbed was leaked that Singing River CEO Kevin Holland would either be resigning or be fired at the following day’s Board of Trustee meeting. Slabbed put out a tweet on the subject which we were asked to subsequently delete – you had to be there to win. Sure enough Karen Nelson would break the news on Thursday that Holland was leaving and that gets me back to the head-scratcher on being asked to delete the Tweet that Holland would be leaving because the fact that segments of the Jackson County Board of Supervisors were unhappy with Holland’s job performance has been very well reported in both the newspapers serving the area. Looking back at the events of last week there was something else going though which a perusal of Mississippi Electronic Courts revealed:

Notice of Depo CA by Slabbed on Scribd

But before we examine the context of Chris Anderson’s upcoming deposition we need to circle back to Karen Nelson’s account of the FY 2016 audit:

Singing River Health System dropped from a Level 2 to a Level 3 trauma rating when it cut back on neurological services, and the hospital system is no longer majority owner of its two outpatient surgical centers.

But Chief Financial Officer Brian Argo told Jackson County elected officials on Monday that the health system is cutting costs and is continuing toward financial recovery with a profitable year.

Argo went over the annual independent audit, this year by Dixon Hughes Goodman, which confirms the county hospital system ended the fiscal year on Sept. 30 with a positive bottom line of $5.1 million.

Looking at the audit report linked above I’m not sure where the $5.1 million dollar number comes from but I did see about a third of the consolidated net income was derived from the sale of assets inside a not for profit “blended component unit” called “SHRS Ambulatory Services“:

SRHS Ambulatory Services, Inc. (“SRHSAS”) is a component unit of the Health System and is presented as a blended component unit as of September 30, 2016 in the Health System’s financial statements. As the sole member of this not-for-profit organization, the Health System exerts control and has a financial benefit relationship. SRHSAS is operated by a Board of Directors, all of whom are appointed by the Health System’s Board. As of September 30, 2016, SRHSAS holds a non-controlling 24.5% ownership interest in two ambulatory surgery centers, Mississippi Coast Endoscopy and Ambulatory Surgery Center, LLC (“MCEASC”) and Ocean Springs Surgical and Endoscopy Center, LLC (“OSSEC”). Prior to a sale of controlling interest in the year ended September 30, 2016, SRHSAS was the 51% owner of MCEASC and OSSEC, both of which were consolidated subsidiaries of SRHSAS at September 30, 2015. See further discussion of the sale of controlling interest and deconsolidation of MCEASC and OSSEC at Note 16. All significant intercompany transactions have been eliminated.

Along those lines there is another blended component unit called Anesthesia Services, LLC, which has a super massive revenue recognition “material weakness” of the variety that I can image would give most health care financial professionals a Myocardial infarction but that is another post. I will add there have been rumors about that particular operation circulating for at least two years.

Now back to Ambulatory Services because back in March of this year it filed suit against Pine Haven Group, LLC seeking to undo a land transaction to which it was a party all the way back in December 2007. I’m not a lawyer but examining the docket in the case caused me to scratch my head a time or two. Real Estate law is its own special breed of law so maybe the theory of recovery would make sense to a specialized legal practitioner but it makes no sense to me. Below is the original complaint, which has since been amended to include the title insurer as a made defendant:

1-main by Slabbed on Scribd

Almost immediately after the original answer was filed, Ambulatory Services filed a Motion for Summary Judgment (MSJ) which was one of the major causes of my head scratching. The MSJ was repeated after the first amended complaint and answer/counter-claims were filed. I completely fail to see how the MSJ survives except for the fact that the parties are conducting some discovery to brief the issue and that discovery involves deposing the greatest heel in the entirety of the SRHS pension meltdown saga, former SRHS CEO Chris Anderson, the notice of which is embedded above.

Before we go any further we need to circle back to Karen Nelson’s account of the 2016 audit presentation because it has some more important clues provided by the current CFO:

The big concern is capital needs for the two-hospital system that includes Singing River in Pascagoula and Ocean Springs Hospital.

He said the former leadership team of SRHS failed to invest back into the system.

He said that as the hospitals move forward, any “free cash flow” will go to making needed repairs and maintenance.

As a fellow financial professional I can translate the former statements in a less charitable way:

“We are making our profit off deferred maintenance.”

This would in turn explain why the County Supervisors were the ones asking the most question during the presentation which also revealed one other problem:

Argo said the hospital system has a plan to absorb what could be up to $2 million in legal fees it amassed in fighting retirees over the failed pension plan. It has racked up $3 million in costs, but its insurance company recently won a decision in federal court that coverage stopped at $1 million. Argo said SRHS is appealing the decision.

In a quick update on the pension plan, he told supervisors the SRHS pension liability increased from $304 million last fiscal year to $333 million because of changes in investment returns, administrative expenses and a lack of payments into the system. Administrative costs have increased from roughly $350,000 to $700,000.

New pension trustee Steve Simpson sure sounds expensive but that is also another post folks. For all the rosy talk about a turnaround at the end of the day the Hospital System was simply another year older and deeper in debt and this gets me back to the lawsuit SRHS Ambulatory filed against Pinehaven because I have a pet theory but to set it up we need to examine a piece of evidence introduced in the case in the form of a letter written by the Title Insurance Company’s Senior Claims Counsel which summarizes some of the key events in the unfolding saga:

And we have this from the Original Complaint: 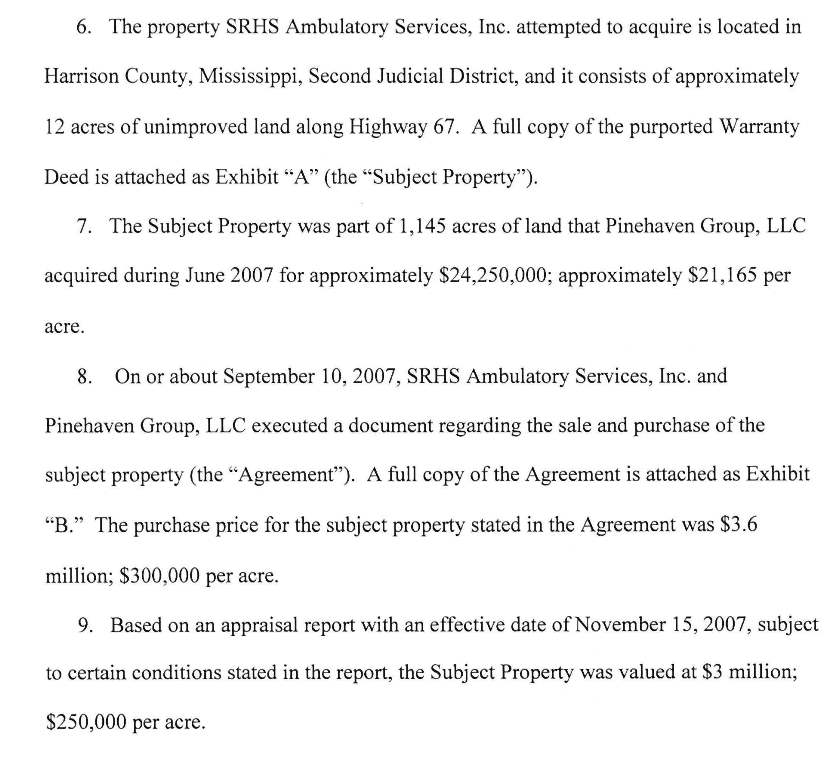 So now we have a Jackson County Land deal where the purchase price exceeds the appraisal and folks there nothing like a Jackson County land deal for that certain je ne sais quoi where something smells rotten but you can’t quite pin point the source and it is at that point you go looking for the incest. The questions that immediately come to mind is who is behind Pinehaven because that has big potential. This I can you you folks, the LLC that sold Pinehaven the land in question in June, 2007 that was resold to SRHS Ambulatory in December, 2007 included as a member Attorney Billy Guice, a name that came up in the letter written by the title insurance carrier that is well known to everyone that has followed the pension meltdown saga. Here page two of of the deed from that sale which is signed by Mr. Guice: 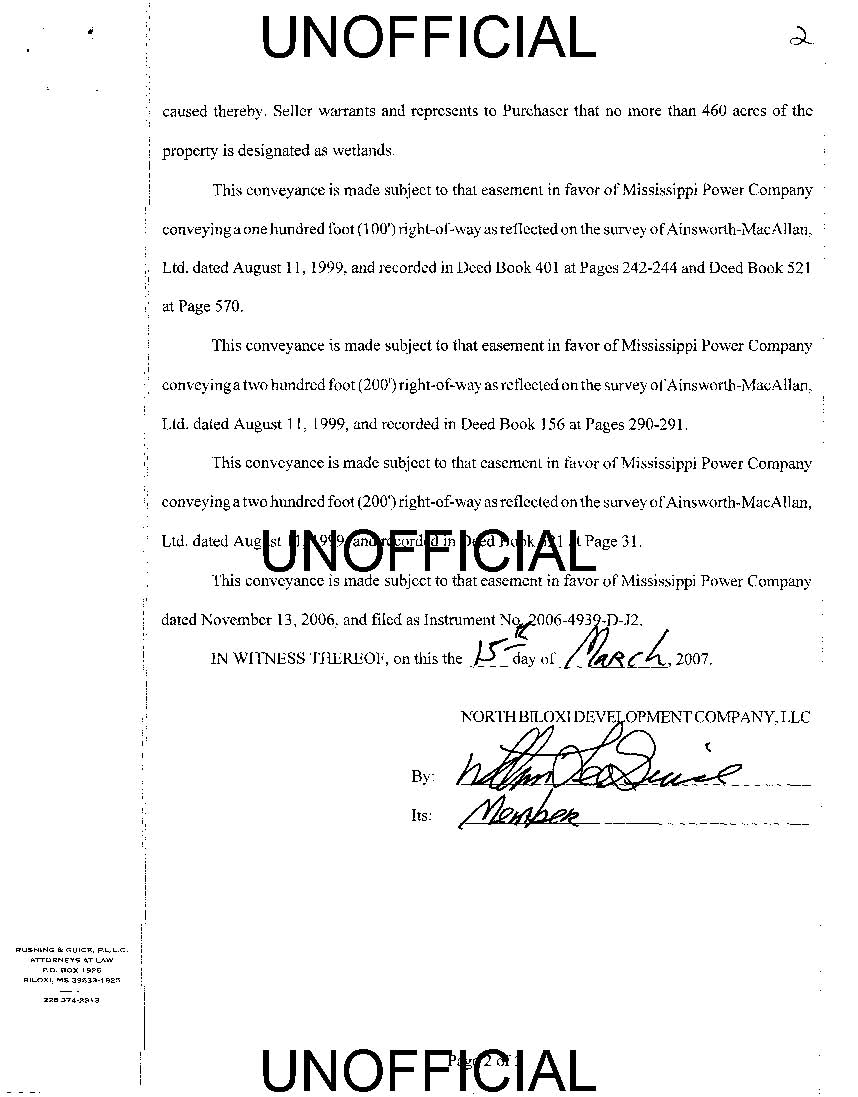 It is at this point I want to make clear that Slabbed is not accusing Mr. Guice of anything. The complaint pleads that Guice’s LLC sold a big parcel of land with frontage on a major 4 lane Highway for $21,000/acre to Pinehaven, who then sold a smaller parcel to SRHS Ambulatory for an amount greatly in excess of the appraisal and per the Title Insurance Claims Counsel it was former CEO Chris Anderson that suggested not formally telling the Board of Sups about the land purchase and this brings me to a theory about this entire suit.

Suppose for a second my skepticism about merits of this lawsuit are accurate. Further lets suppose that since this is a land deal which has roots in Jackson County that it stinks since the land was purchased for an amount in excess of the appraisal and former CEO Chris Anderson was involved. You gotta wonder what’s behind the green doors and the key to door number 1 is a made defendant in Pinehaven while the key to door number 2 is a subpoenaed witness in former CEO Chris Anderson. Put another way the muck potential is off the charts.

So why was Kevin Holland told to leave? Was it the local geo-political forces finally overwhelming him or does it have something to do with this case because Kevin Holland was at Chris Anderson’s side back in 2007.  This litigation gives us the potential to find out what’s driving rumors that come from the capital asset binge the hospital was on at the time. It also tells us that the Hospital system is desperate for cash and that is not a good sign.

Something tells me we’ll be having more on this.