It’s been on at least the last two meeting agendas and sure enough it made it back onto the agenda for tonight’s recessed Bay St Louis Council meeting: 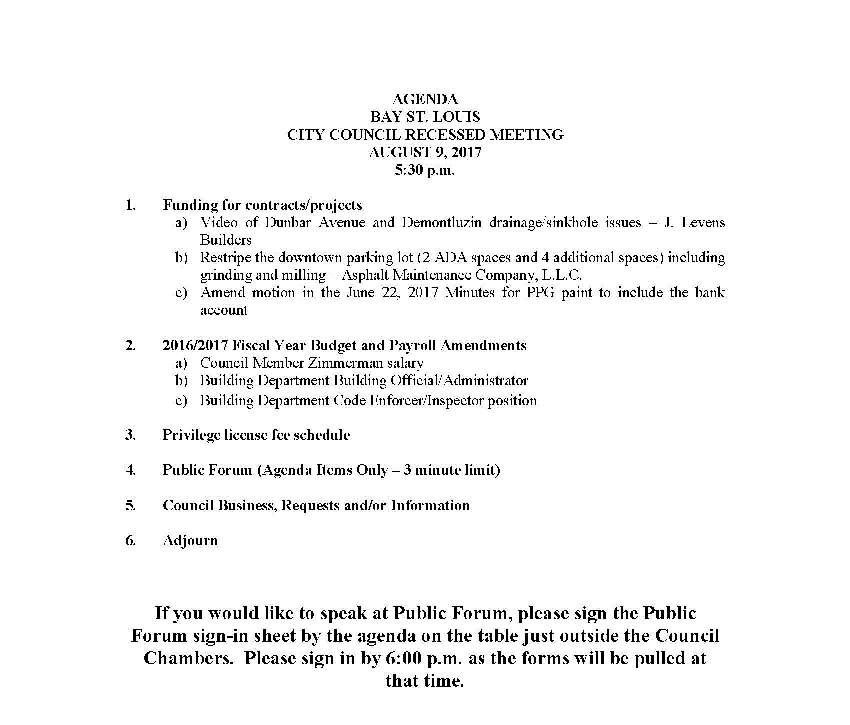 Why on God’s green earth would Councilman Zimmerman’s salary be a topic for discussion? I asked and the answer I got was disturbing on several different levels. It appears Zimmerman took early social security to help make ends meet and now doesn’t want to make too much money and jeopardize his new government check. My instant reaction was to wonder why he did not think about the ramifications of running for office when he qualified for the Ward 5 Council earlier this year.

Normally a politician not wanting to take a paycheck would be refreshing and it could have been for Zimmerman had he thought things through but it is clear he didn’t do that before running to the taxpayers for a solution to his personal financial problem with Social Security. It also carries implications about his financial acumen which, for a councilman in a “strong Mayor” town whose main job responsibilities are financial in nature, (Budget and annual audit) is a must in order to be effective.

I am asked about taking social security early frequently in the day job, in fact the interplay between taking early social security and planning for a steady retirement income stream is the number 1 question I am asked by my individual income tax clients. Since Mr. Zimmerman put his personal finances on display I’ll use the numbers he disclosed to illustrate a point that trying to game social security is a losers game.

First up is the income:

Social Security uses a very specific term here in “earn” for it has an important legal meaning. For instance you may work a lifetime to “earn” a retirement benefit such as PERS but it is not considered “earned income” for either tax or social security purposes:

If you work for someone else, only your wages count toward Social Security’s earnings limits. If you’re self-employed, we count only your net earnings from self-employment. For the earnings limits, we don’t count income such as other government benefits, investment earnings, interest, pensions, annuities, and capital gains.

Another possibility is that perhaps Mr. Zimmerman is getting his financial advice from an imbecile or perhaps he simply made this a topic for council business because he didn’t do any real research beforehand (the social security fact sheet I linked earlier in this post was found in less than a minute using google). It could be something else altogether but whatever the reason when the Councilman perceived a problem with his personal finances, his solution was to run to his employer which is a big no no in the business world. All of this raises questions about the soundness of his financial acumen which is not a good thing.

If there is a sad thing here it is this: If Councilman Zimmerman truly wants to serve without a salary he could have handled that without bringing his personal financial problem to the Council via the concept of rescission. That would have only involved two people besides the Councilman in Mayor Favre and his payroll clerk. As an added bonus he could sold the fact he was serving for free, which the public invariably sees as a noble gesture by politician instead of being seen as a functional financial illiterate trying to get one over on the man to save a few bucks on his early retirement. The bottom line is whoever is giving him political advice is not doing him any favors.

Note: Before this post was published the recessed meeting agenda for tonight’s meeting has been amended and Councilman Zimmerman’s salary is now gone from this meeting agenda. Perhaps the light bulb belatedly turned on which would be a good sign. An important heuristic that everyone should remember here is generally speaking, you never get ahead in life turning down the chance to make money.

4 thoughts on “Personal finance: Am I the only one that sees a problem here?”