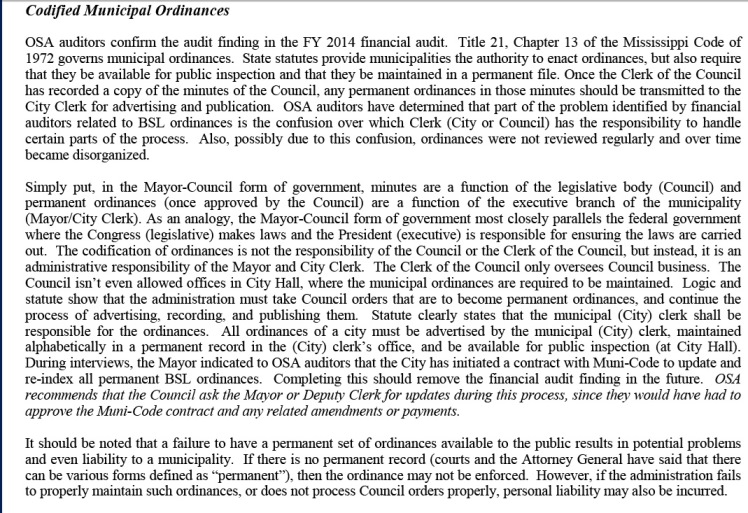 It’s clear from the State Auditor’s language Mayor Fillingame was confused as to his job responsibilities in 2014, despite being well into his second term as the “Strong Mayor”. A plain read of the Performance Review shows he pointed the finger at the Council and Council Clerk as the reason for his incompetence but as OSA makes clear that dog don’t hunt. Along those lines it should surprise no one I am hearing Fillingame and his political supporters are again pointing the finger at Former Council Clerk Jane Carrow in an effort to scapegoat her for the Mayor’s ineptitude. But it is worse than that because there are other official actions that must be advertised in the local paper such as Debt issued that is backed by the full faith and credit of the municipality. There are currently “dedicated”* tax levies to pay these debts which were never advertised. The liability exposure to the City could run into the millions folks, such liability pointed out by the State Auditor in the Performance Review.

These problems, all identified long ago, continue to keep coming up. Luckily for weary taxpayers in the Bay an opportunity is coming in early June for the Citizenry to take out the trash at City Hall. Unfortunately for the taxpayers, making good with citizens like Mr. Adams is likely to cost scarce tax money well into the future.

* Term used with caution in Bay St Louis as the Mayor has no problem expending dedicated funds for prohibited purposes.

23 thoughts on “Another Stunning Display of Ineptitude by the Fillingame Administration……..”