Folks before you swear out a criminal complaint against someone you should always consider whether or not there are third party security videos that would undermine your affidavit. Did Katie Fillingame Stewart consider that the Camera Never Blinks? I’m thinking the answer to that question will be revealed in fairly short order.

Slabbed has seen two different security videos that depict the events leading to Ms. Stewart swearing out that criminal complaint against Harding. What was most interesting to me is the white vehicle that was tailgating Mr. Harding and the Les-Fiillin Machine aka the LesLie Mobile, who was around 11 seconds behind Ms. Stewart. This situation is still fluid folks but rumor holds that white vehicle behind Harding was being driven by a Bay St Louis police officer that would in turn be a witness to the entire chain of events. Maybe this is why sources are indicating to Slabbed that Bay St Louis Police Chief Denardo has turned this matter over to Hancock Sheriff Ricky Adams. Commenter Paying Attention revealed what could be a much bigger problem for Hizzoner last night:

It has been reported that they are following their adversaries with part time cops.

Has Chief Denardo and his guys become hired muscle for the Committee to Re-Elect Les Fillingame? That is a disturbing thought folks.

So while the local hens are squawking on the Sea Coast Echo Facebook page this comment by Carter Bingham may well prove prescient:

For those of you who love and adore your Mayor and his inside click, remember me. I am the guy telling you that using his elected position to maliciously prosecute a person is perhaps his biggest blunder. “Malicious prosecution” is a tort which is actionable through the civil or courts. It is an action generally taken against the police but is indeed available where a private prosecution has taken place. Couple that with a vested interest in defaming a loudmouth opponent and now you have a much deeper hole. I urge each of you to sit back and watch the show. A devout spectacle of opposition with unlimited funds vs the already broken down culture leader of vast influence with no integrity or actual culture to speak of. Where each party sustains a similar degree of harm and, in the absence of good third party evidence, it can be very difficult to prove the word of one party against the other. Where a court finds in favour of a complaint of “malicious prosecution”, the remedy is damages.

Those of you interested in reading the entire Complaint for Damages in the civil suit Jeff Harding has filed against Katie Stewart can click the picture below to nab the 6 page PDF. 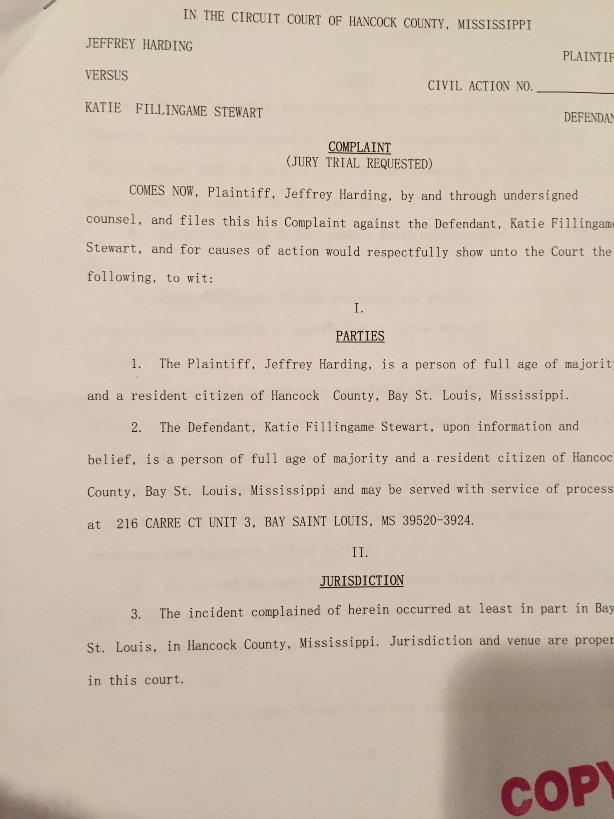