This is one of those circumstances where it is again good to have a variety of viewpoints on a news item because one could watch the Tee Vee news here on the Coast1 and come away thinking the Singing River Retirees have been made 100% whole but unfortunately this is wishful thinking. Shearing the flock has to be done in stages and now the stage shifts from the Federal Courthouse in Gulfport back to Chancery Court in Jackson County where the actual haircuts will occur.

The certainty in that statement lies in the dollars and cents currently in the plan’s trust account and the fact that the early payment schedule provided for in the settlement does not provide much immediate help to improve the overall financial condition of the trust. The only immediate benefit is non-monetary benefit in the finality and closure provided by the settlement itself.

From a larger standpoint and viewed through the lens of time the Singing River Pension Debacle is just the latest in a long line ‘incidents’ where the ordinary people in the community get sheared for the benefit of portions of the Jackson County political oligarchy.  Slabbed has documented several of these incidents including one of the most recent on these pages.  The financial results of these ‘incidents’ are on display for everyone around Jackson County to see at locales such as 435 East Beach in Ocean Springs.  For the folks in Jackson County, the regularity of these ‘incidents’ paid for by the public, or in this instance by both the public and the Singing River Retirees, represent the worse kind of tax imaginable because it is a hidden tax paid to the benefit of the few.

In the case of the Singing River Health System, the most galling aspect of this whole saga for the retirees is that a large portion of the very people that brought the County and the SRHS retirees this pension disaster remain firmly attached to the Health System, ostensibly skipping away as if nothing happened.  For the new SRHS trustees, I frankly can’t fathom on what basis they have to actually trust the advice they are being given to support their decision making. You gotta think based on what has occurred that in the next disaster they’ll be tossed aside as easily as their predecessors.

Finally, and once again despite the billowing smoke that signals the strong possibility that illegal acts have occurred, both state and federal authorities can’t ever seem to find anything wrong in Jackson County, in this case despite the documented instances where falsified annual retirement statements were furnished to the plan participants via US mail.  In many locales after a financial disaster of this magnitude someone responsible will go to jail.  In Jackson County, the perpetrators upgrade their yachts or build large houses in exclusive neighborhoods all while planning the next mass shearing.

I’ve read Judge Guirola’s decision and he explains a complicated process pretty well.  I’ve had many lawyers tell me that a fundamental truth about the Federal Court system is that it is designed to facilitate settling cases more so than litigating them to the bitter end. From that lens Guirola’s decision to ratify the class settlement was almost a foregone conclusion.  I harbor doubt an appeal has much of a chance of success at the Fifth Circuit.

So now the stage shifts back to Jackson County and Slabbed New Media will be there to tell the story and as always we’ll be emphasizing the little people that have again been trampled.

The 43 page opinion and order approving the settlement can be had by clicking the picture below. Stay tuned. 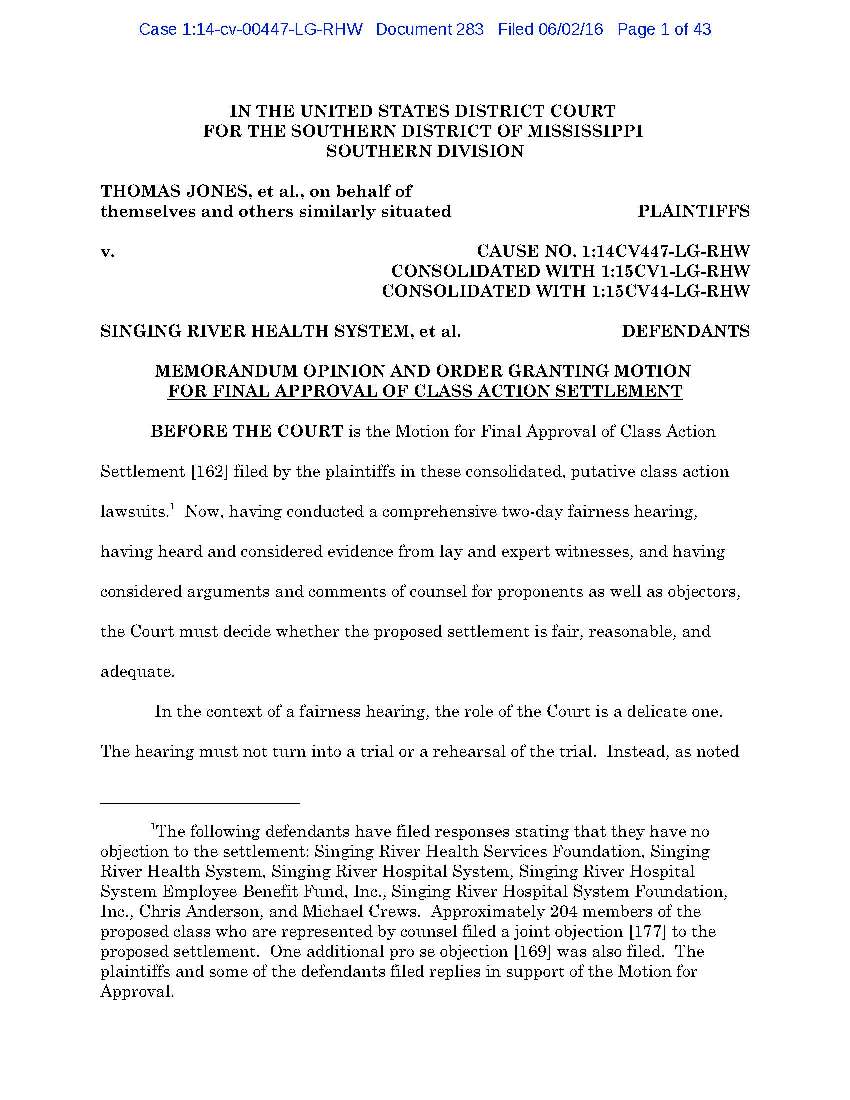 67 thoughts on “Fanfare for the common man: The only people getting 100% on the dollar in the Singing River Pension Debacle are the Lawyers”