Is the institutional way the Catholic Church remains some sort of Gay Mens club with Nambla like features.

Transcript | Secrets of the Vatican:

NARRATOR: The world he is describing was captured by reporter Carmelo Abbate, who began a two-year investigation when a gay friend told him he’d just had sex with a priest.

CARMELO ABBATE, Author, Sex and the Vatican: [through interpreter] The priest went on to say, “Actually on Saturday, there will be a party here in Rome, in a club in Testaccio, with me and lots of other priests. We’ve also booked two escorts from Turin, from Piemonte, who will be the entertainers at the party. If you like, you’re invited. I’d love you to join us.”

NARRATOR: Abbate went with his friend to the party and took a hidden camera.

CARMELO ABBATE: [through interpreter] My objective was to write a story for my newspaper, not to make videos. But I knew very well what I was going into. I knew very well how the Church authorities could react. So I wanted to make sure I had evidence to support my story.

NARRATOR: The priest hosting the party greeted them, flanked by the two escorts.

CARMELO ABBATE: [through interpreter] I would have said that half of the people there might have been priests. And it wasn’t just a guess, they introduced themselves as priests.

NARRATOR: Some worked at the Vatican, others in the institutions that cluster around the Vatican in Rome.

CARMELO ABBATE: [through interpreter] The party in Rome ended at my friend’s house. At the end of the party, we all went back to his place. Then my friend and the French priest locked themselves in a bedroom, and I went to sleep in another room.

NARRATOR: The next day, Abbate continued to film.

CARMELO ABBATE: [through interpreter] Then came the moment that I found most shocking of all, and that was the moment that opened my eyes to what was really going on. It wasn’t just a matter of sex. It was something more. So there we were in that atmosphere, in that house where they had had sex all night long, and with that man wearing vestments, and he took out all his paraphernalia and started to celebrate Mass.

And if you narrowly define the term “dishonesty” to cover criminal activity such as the conversion of municipal assets, embezzlement of funds and the like I completely agree with Mayor Fillingame because Slabbed has found no evidence of such wrongdoing and believe me when I say if I thought there was some hankey-pankey going on Slabbed would be on it.

That said there are two active investigations underway at City Hall including one by the gang at the United States Department of Justice.  When asked by Councilman Favre last night about the active investigations involving misspending of Drug Forfeiture funds City Attorney Donald Rafferty indicated that he thought the Administration would be vindicated and that brings me to another word in “misspending” “misspend” “misspent”, terms I have used to describe the problems in the City’s financial management. The Mayor made it clear in his remarks he thought the term was too strong. I took the liberty of looking it up for everyone during last night’s meeting posting same to Slabbed’s twitter timeline:

Mayor takes issue with use of term “misspent” as appearing on Slabbed. I think it nails it. pic.twitter.com/VYpMaYCUR2

Meantime Wes Muller over at the Sun Herald wrote a pretty good account of last night’s meeting correctly framing the root problem of audit recommendations contained in bad audit report after bad report being roundly ignored by the Administration.

Bay St. Louis audit report has troubling findings, much like the last one ~ Wes Muller

Finally being as this is Bay St Louis we had to have an Alice in Wonderland type moment and that came when Councilman Seal directed local Alliance for Good Government President Lana Noonan to take down some numbers derived from the FY 2000 and FY 2014 audit reports pointing out that both the City’s General Fund Revenues and Water and Sewer Fund revenues were down compared to FY 2000.  It was a great point, made in anticipation of another tax increase for this year by the Councilman but I wondered if he understood the implications of what he pointed out. END_OF_DOCUMENT_TOKEN_TO_BE_REPLACED

On Tuesday a reader tip lead me to this Ben Myers story on NOLA.com and the entrance of two new contenders in the Jefferson Parish President’s race, which is gathering momentum now that qualifying has opened for next month’s election. One of those contenders was mentioned in comments to a February 2015 report right here on Slabbed, “I am hearing rumors of turmoil and termination in Team Elton Lagasse” which reported on Lagasse’s Parish Council staff turnover. As I mentioned there was a backstory involved with the departures and indeed this story has literally taken months to develop and it is still not fully there but the truth is beginning to bubble up, as often happens even when attempts are made under the color of law to cover things up.

One thing that Slabbed will bring to the light of day in advancing this story is the fact that Former Lagasse Council Aide turned JP Parish Presidential candidate Robin Christiana evidently left on good terms with her former boss, who heartily endorsed her abilities: 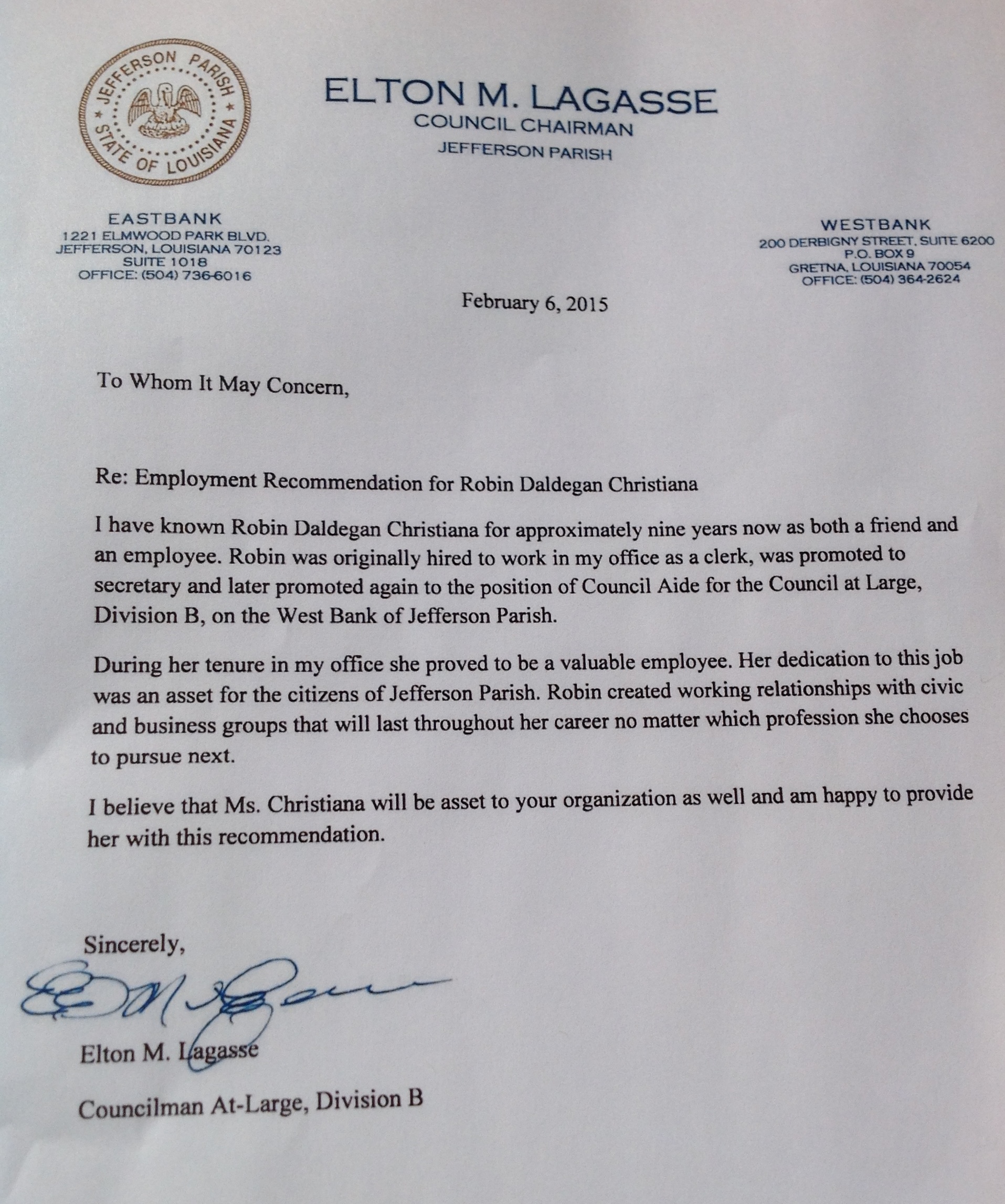 I had the opportunity to chat with Mrs. Christiana Tuesday evening. She described herself as a reform type candidate that is committed to continuing the reforms instituted by current Parish President John Young in response to the 2010 Aaron Broussard political corruption scandal. Despite working for Councilman Lagasse for 9 years Mrs. Christiana also describes herself as a political outsider that is committed to running a grass roots campaign that is free from the taint of political contributions from entrenched Parish contractors telling Slabbed there was plenty of Jefferson Parish contracting to spread around among all the local governmental contractors instead of a few that recycle money back to the politicos.

Since qualifying opened Christiana has been joined by Al Morella and Vincent DeSalvo Jr. in the Jefferson Parish President’s race which also features Councilman Lagasse and Kenner Mayor Mike Yenni. This race is certainly worth keeping an eye on.

In the investment business, they say stockbrokers never get rich, because they don’t believe their own BS.

Trump is rich, having fun, and leading in the polls. So maybe he does believe his own BS.

In any event, he has become, in the words of Eugene Robinson of The Washington Post, “A farce to be reckoned with.” He makes his opponents look small, weak, and boring by comparison. At least for now.

The question is, will he wear well over time. We’ll know more on September 16, 2015 at the next Republican Debate, hosted by CNN at the Reagan Library in Simi Valley, California. The moderators are Jake Tapper of CNN and radio personality and movement conservative Hugh Hewitt.

Expect emphasis on the following topics:

The Iran Deal and Israel’s opposition

This is CNN moderator Jake Tapper’s sweet spot. He’d love to spend the entire two hours having all the candidates compete with each other over who loves Israel the most and has the lowest opinion of the Iran Deal. Expect it to get embarrassingly creepy … which means Ted Cruz and Mike Huckabee will be in their sweet spot.

It will be interesting to see how Donald Trump and Ohio Governor John Kasich handle this topic. Trump has built his reputation on being candid and fearless. He claims he doesn’t need mega-donors like Sheldon Adelson. If all Trump can do is mouth Israel Lobby approved mush, his tough and independent image will take a hit. Continue Reading………