Jackson County Supervisor John McKay and his unwavering support of Bill Walker during the DMR Scandal was certainly enough to put him on Slabbed’s radar screen back in the day.  Since then we’ve all gotten to see McKay in action once again in the Singing River Meltdown beginning with the demise of his appointed trustee, Morris Strickland.  No one news story better encapsulates John McKay the elected official than the saga of the folks in Vancleave up on McGregor road that were McKayed by McKay and his political family during the construction of the new Ocean Springs High School. I can think of no better place to start telling this story than with Jackson County Spokeswoman April Havens in early December 2009:

A Kiln man who won a $3.1 million contract to supply dirt for the new Ocean Springs High School was granted permission by county supervisors Monday to construct two 10-acre catfish ponds on his Vancleave land despite local resistance.

Tommy Cobb bought the McGregor Road land in June 2008, he said, to use for hunting and catfish ponds.

In October, the Jackson County Planning Commission voted 6-1 to allow Cobb to construct his ponds and haul off the dirt, but resident Louis Fortenberry appealed that decision to the Board of Supervisors, which heard the appeal Monday.

Fortenberry claimed Cobb hadn’t received the proper permits for digging the ponds, among other problems.

Supervisors, however, said the Mississippi Department of Environmental Quality confirmed that Cobb received his necessary permits for the ponds, which will be 8 feet deep.

And indeed Cobb did have Catfish Pond permits, which are far easier to obtain from MS DEQ than a permit to extract dirt as we continue:

Attorney Michael Watson said Cobb would not maintain a dirt pit, but rather haul the dirt to the new Oceans Springs High School site, for which his company, G&C Construction, won a contract.

G&C Construction won a $3.1 million contract to supply the high school with 260,000 cubic yards of dirt, he said.

To some, that plan might “look fishy,” Supervisor John McKay said, noting some are upset that Cobb was able to “lowball” the bid because he’d be using his own dirt.

“I haven’t liked the way this has been handled, but we allow other people to dig ponds,” McKay said before making the motion to deny the appeal.

“I think you have a legal right to do what you’re doing,” he said.

Watson said Cobb bought the land in 2008 with the intent to construct a hunting camp and the ponds.

“He’s been open and honest,” Watson said. “He’s had the same intentions from day one. I’m sure some folks are going to say he worked one over on the system, but it just worked out for him.”

So here are the players per Haven’s press release, Tommy Cobb, Supervisor John McKay and now State Senator Michael Watson.  Mr. Cobb sure was lucky finding land with supposedly suitable dirt for the construction of a new high school where he was supposed to start digging some Catfish Ponds. Even luckier is Cobb’s catfish and dirt site was evidently the one closest to the site of the new high school which means everything in terms of transportation costs thus the “low ball” remark by McKay. I could be wrong but I think the Cobb Catfish Ponds are the “mud hole” that Stacey Pickering referred to in his now infamous DMR family speech but before I get to that, allow me to introduce the consultants Cobb hired to help him out with his Catfish Pond project per a source familiar with the details of the construction that has spoken to Slabbed New Media under condition of anonymity:

The permitting of the Catfish ponds was handled at Mississippi DMR by Bill Walker and at DEQ by Trudy Fisher.  Bill Walker’s wife Sharon was on the Ocean Springs School Board at the time as Board President.

Thus G&C nabbed the contract, sold the School District $3.1 million dollars worth of dirt and of course never constructed the first catfish pond, likely because that was never part of Cobb’s master plan to make money Jackson County style.  Here is a picture of the site from earlier this year courtesy of the folks at Google Earth.

In fact, Mr. Cobb would die young on October 21, 2013 then as a resident of Oxford Mississippi according to his obituary, which was obtained by Slabbed New Media.  And just as Mr. Cobb died young, so did his company because on December 11, 2012 G&C Construction filed for Chapter 11 bankruptcy.  This was ultimately converted to a Chapter 7 liquidation as the company was unable to reorganize its affairs.  Included as a creditor was the United States EPA, which tagged G&C with Clean Water Act violations related to the construction of the road used to extract and haul the dirt to the high School construction site.  I reckon Mr. McKay was wrong about G&C having all the required permits as the EPA begged to differ practically from the start of the operation in late 2009: 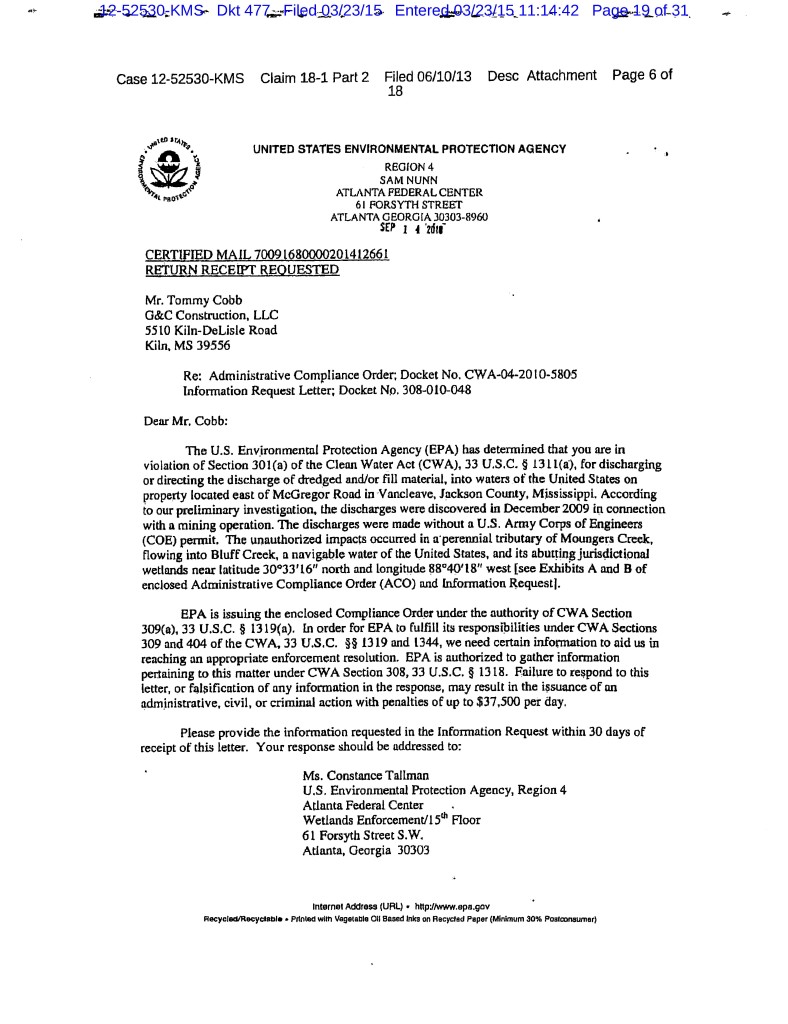 Normally, voters that are sold out by their elected representative would get a chance to evaluate the job performance of their elected official at least every four years in a voting booth but in a final show of what makes Jackson County such a special place the gang on the Board of Supervisors made sure McKay’s problem was taken care of by redistricting the area into District One in 2013. Again we turn to the County Coms Department for the skinny:

“I didn’t realize that,” Supervisor John McKay said. “I figured the new maps would take over at the next general election.”

McKay said he’s concerned because his lines and Supervisor Barry Cumbest’s district lines change quite a bit with these new maps.

“It concerns me that there will be people who voted for me that won’t be represented by me anymore,” he said. “And there will be some who didn’t vote for me that I’ll represent. I guess I’ll just have to introduce myself to them.”

McKay predicts “there will be a little confusion for a while” as residents learn who to call when they have a county issue.

Somehow I doubt Mr. McKay included this chapter of his political career in his introduction to his new constituents.

Let’s review. An out of town contractor just happens to show up and buy land to dig catfish ponds at the same time the new Ocean Springs High School needs a massive amount of dirt. Despite not having all of the required permits, Supervisor John McKay green lights the project while declaring it fishy but in order and completely permitted. Two of the three CONsultants hired by the contractor just so happened to end up in the federal prison a few years later on public corruption charges along with Bill Walker, who was a close fishin’ buddy with Supervisor McKay. Does this sound like Jackson County to you folks? It sure does to me.

This post was made possible only by the support of generous readers in Jackson County.

See also What do Pinocchio and Supervisor McKay have in common?

42 thoughts on “Nothing fishy here, what’s a hole in the ground between friends. Slabbed takes a trip down memory lane with Jackson County Supervisor John McKay”