What I can do is this and that is to give everyone a steer. First you must read the following including the comments:

Then for those of you that have a bit of time, read Slabbed’s cumulative reporting on the now deceased Louisiana class action attorney Hugh Sibley.

The ground being plowed was fertile then and it remains so IMHO. It is absolutely dangerous territory.

LOUISIANA PLAYS MAJOR ROLE IN THE CIVIL WAR FROM START TO FINISH!

The Civil War came to an end 150 years ago this week when an exhausted confederate army, led by General Robert E. Lee, formally surrendered to Union General Ulysses S. Grant at a farmhouse in Appomattox, Virginia. From the beginning of the war to a bitter end on both sides, Louisiana played key roles in how this tragic war was fought.

Don’t you know it was a French Creole General from St. Bernard Parish who started the whole thing by firing the first shot at Fort Sumter back on April 12th, 1861? Pierre Gustave Toutant-Beauregard was born on a sugar cane plantation, trained at the United States Military Academy as a civil engineer, served for a short time as superintendent at West Point, then resigned to became the first brigadier general of the Confederate States Army. He didn’t do so badly after the South was defeated, retuning to Louisiana to make a fortune promoting the Louisiana Lottery.

The first president of the confederacy was Jefferson Davis, who Mississippians claim as one of their own. But Davis spent a number of his younger years in both St. Mary and West Feliciana Parishes. When he was elected to lead the confederacy, his home was on Davis Island Surrounded by the Mississippi River across from Newellton, La. The cut off of the river should have technically made the Davis home in Tensas Parish rather than Warren County, Mississippi. Louisiana Governor John McKeithen made a number of trips to walk the ruins of Davis Island. Davis died in in a New Orleans Garden district home, and was initially buried in Metairie Cemetery. So his Louisiana bond, from youth to death, is extensive.

Union Army General William Sherman had strong Louisiana ties, but turned out to be one of the most vicious, vengeful, and polarizing military leaders of the entire war. History will remember him as a no holds bared, take no prisoners commander who left a path of devastation, death and destruction during his notorious “march to the sea” to capture and burn Atlanta. This was the beginning of the end for the South. Louisiana will remember him as the ungrateful first president (then called Superintendent) of LSU when he was appointed in 1859. Continue Reading………….

Feedback, especially empirical feedback, is some of the most cherished information I get running Slabbed, mainly because I feel like I don’t get enough empirical feedback, positive or negative about the website. On occasion  though Slabbed gets some empirical feedback in the form of a new twitter follower that is new to twitter, which means the follow comes from an initial selection of informational sources by that user.  It recently happened and the feedback reminded me of the awesome responsibility that comes from running this website: 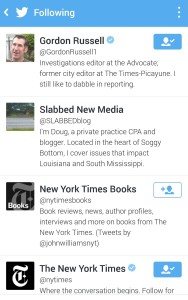 Thank you for being in that number.