Ramon Antonio Vargas tells the story behind the story of a determined litigant in former Jefferson Parish CAO Heather Hilliard and her two and a half year journey to justice for the New Orleans Advocate that is good reading as another news story originally broke by Slabbed New Media (here and here) completes its cycle through the news. Looks like I’ll need to shake the tree to see what is happening these days up on 10 at Yenni.  😉

Moving right along in other litigation news, it does not appear KPMG is very scared of the lawsuit that Kevin Holland and company at SRHS filed against the audit firm late last week per April Havens.  I really don’t want to throw any wet blankets on this legal matter but based on the wording in the complaint, I think the only people that will make any money from the endeavor will be the lawyers.  I strongly suspect we’ll be seeing a 12(b)(6) motion asking for dismissal from KPMG and the reason such a motion stands a good chance is actually found in the 2013 Audit Report prepared by Horne CPAs in several places but I will highlight two places, the first on pdf page three of the report.

Management’s Responsibility for the Financial Statements

Management is responsible for the preparation and fair presentation of these financial statements in accordance with accounting principles generally accepted in the United States of America; this includes the design, implementation and maintenance of internal control relevant to the preparation and fair presentation of the financial statements that are free from material misstatement, whether due to fraud or error.

You would assume someone that has been in a senior management role at SRHS for as long as CEO Kevin Holland would understand these things but my experience is when the shit hits the fan, the stuffed suits typically pretend they don’t know jack while trying to cover things up and this is indeed the route senior management at SRHS has been taking since last March. Preserving talking points seems to be the paramount concern at SRHS these days and the public money being thrown at the KPMG lawsuit endeavor will be both copious in amount and represent a good example of the wasting of assets, all while management at SRHS tries putting the screws to its own retirees.

Here is the second place that I mentioned and it is on the very last page of the audit: 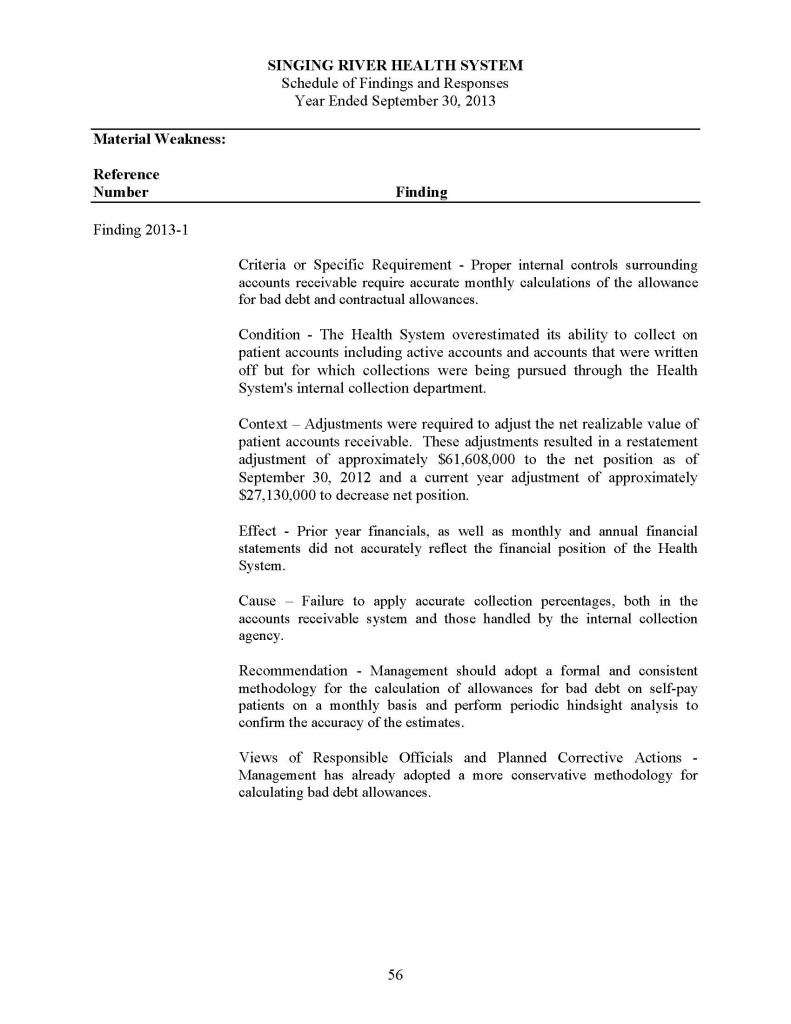 Our readers will notice that Horne puts the blame on management where it belongs. The question in my mind is why would Holland, ostensibly blameless in all of this, be working so hard to cover the true nature of the mess. I also wonder on what basis Holland and his sidekick Lee Bond actually expect the retirees to trust them because I’m not seeing it.