Folks, a few years ago when the Ed Rust Memorial Flood Insurance reform act was passed there was one website in the country that knew the fix against the ordinary Joe was in and that would be Slabbed. Locally, the real estate market died when the cost of Flood Insurance skyrocketed and all the local pols like Louisiana’s Mary Landrieu and Mississippi’s Steven Palazzo, both of whom voted for the insurance industry sponsored bill, ran away as fast as they could as the specter of mass bankruptcies in their constituency loomed large. Another bill with band aid attached was passed and all was declared right in the world, except it isn’t.

There is nothing I could write on election day that would impact more than a handful of voters as people generally have their minds made up well before election day but today before most of you head out to the polls I’d like to remind you folks there is not a nickle’s worth difference between the two political parties as it appears most of those running for high office are strictly in it for themselves, their friends and family and I have an example right here on the Mississippi Gulf Coast which again illustrates the concept.

Last February, NBC News’ Bill Dedman ran an expose on how the rich, famous and powerful had an inside fix for the Flood Insurance blues in simply paying someone to have their property removed from the Flood plain in the FEMA Flood Maps. Gulfshores Alabama had several beachfront luxury condominiums remapped from the Flood Zone saving them (and the folks from places like Jackson, Mississippi that own the units) literally hundreds of thousands of dollars annually. The specter of the owner of the house just up the beach actually paying more in annual flood premiums for a beach house than a luxury condo tower became reality and those that can afford to own an oceanfront condo once again get the government subsidy.

The NBC series on the topic had multiple installments including one which detailed how hard it is for the average Joe to get FEMA to correct errors in their maps let alone getting repetitive loss properties removed from the flood zone.  It is not cheap or easy unless one happens to know the right person, or happens to be related to one and that brings me to the coast because the NBC map of properties removed from the Flood Zone included two in the Pass.  Here is one of the subject properties

The property owner’s name is listed at the bottom of the cover letter but I went to the Harrison County Tax Collector’s website to verify the subject beach front property is owned by John and Joanne Curren.  Here is a pic of the house circa June 2013 when it was being constructed after the property was removed from the flood zone per Google maps: 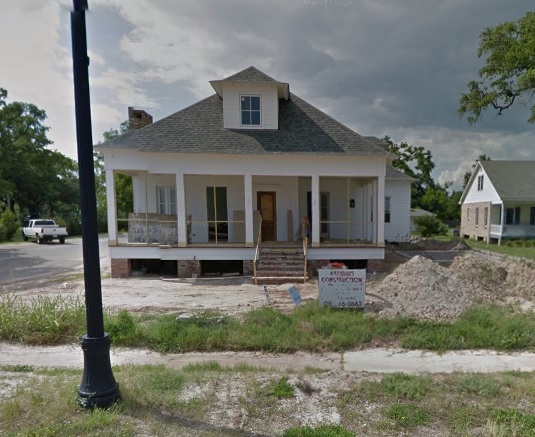 Here is what the property looked like after Hurricane Katrina’s 25 foot storm surge pushed 5 or so feet of water over the area:

So all this begs the question as to the “in at FEMA” at play here. A quick Google of the name lead me to the Curren-Landrieu Court Reporters website and Mary Landrieu’s first cousin Joanne Landrieu Curren.

I guarantee this theme repeats itself from Alaska all the way around to Bar Harbor Maine. Welcome to the brave new world of flood insurance where the worst risks get the biggest break. I’ll be having a bit more on this topic as Slabbed next heads Northeast.

7 thoughts on “There’s something about Mary: A National Flood Insurance Disaster update”