To many electoral observers across the country, Louisiana is the synergy of the political universe. Nowhere is there such a concentration of political interest – right? Wasn’t it a Speaker of the U.S. House of Representatives who said if you want to get a graduate degree on successful politics, go down to Louisiana? And who can forget former Governor Earl Long’s final wish on his deathbed: “Or Lord, when I die, bury me in Louisiana so I can stay active in politics.” There’s more interest and participation in political campaigns in Louisiana than in any other place in the country. Or is there?

A new study by the Wallethub Foundation shows a significant drop in voter participation in the Bayou State. Louisiana has slid down the scale, tying with Michigan for a run of the mill 14th place in the rankings of civically engaged Americans. The study took in a number of factors, ranging from the percentage of registered voters in the 2012 presidential election to the total political contributions per adult population.

Neighboring Mississippi, far and away out ranks Louisiana in voter participation. Young voters (18 to 24) in Mississippi out rank Louisiana by more than 20 points, at 64 percent compared to Louisiana’s 42 percent. Seniors in Mississippi are far ahead in going to the polls with an 82 percent participation rate compared to Louisiana at 74 percent. A long list of Midwestern and East Coast states turn out for elections at a significantly higher level than in Louisiana.
So what has happened in the deepest of the deep southern states, where being active in politics has been a part of the state’s DNA for decades? Politics used to be a way of life in the Bayou State, where the Longs and the anti-Longs, Sam Jones and the reformers, oil money, Edwin Edwards and the rise of Cajun country created lots entertainment. After all, You Are My Sunshine is the state song. Continue Reading………

A few weeks ago the parties to the Bay Tech civil suit settled their differences and the case was dismissed. Terms of the settlement were not disclosed. Those wondering exactly what I am talking about should click here generally and here for specifics on the use of the Bay-Waveland School District to facilitate a real estate transactions that benefited private individuals.

There is one last document in this case that I have known about for over two years that I hope to present to Slabbed’s readers so we can complete the timeline of this specious transaction, which included the Bay-Waveland School District spending almost $100,000 on architectural fees designing a building the Superintendent and School Board knew they would never build. This whole deal completely reeks on several levels folks.

Next Tuesday, the voters in Waveland will be able weigh in with their thoughts on this matter.

And Anita Lee was there when Kerwin Cuevas copped a plea:

Cuevas also said, “The department was being run like it had no oversight and the people in charge ran it like they owned it.”

That one statement sums up the DMR scandal better than anything written before or since. Why Governor Bryant and his legislature refuses to require every state agency to be audited annually defies the imagination…that is until one logically concludes that what we saw at DMR more than likely repeats across every state agency.

As for Cuevas, the man who knew where all the bodies were buried ended up with the best deal.

Mary Landrieu’s only chance is to win outright in the primary:

Meantime the statistical gurus over at FiveThirtyEight have increased Bill Cassidy’s chances of winning to 79% with their latest simulation (Election tab). Drilling down on the polling data shows that many of the polls in the Louisiana Senate race are from C rated pollsters though Suffolk University, which conducted one of the latest Louisiana Senate polls is B rated. All the polls line up with Landrieu losing to Bill Cassidy, the main difference being in victory margin.

And when the costs get passed along with the parties in charge bearing little financial risk it is no surprise to see a chart like this one. The runup into the latest earnings release is especially interesting.

I’m going to be spending some time on Edgar learning more about this mess for myself.  I see stockcharts like the one linked above against the backdrop of these massive cost overruns at Kemper County and the term moral hazard immediately comes to mind. In layman’s terms, it is easy to take risks when someone else bears a disproportionate share of the financial burden.

Stay tuned because this is likely not the last of the bad news form Southern Company and the Kemper coal boondoggle.

Of course there has to be some minor mysteries to attract the sleuths in the Slabbed Nation:

New Orleans police did not immediately respond to questions about the probe. It’s unclear why Russo was not arrested until 16 months after the woman made her complaint and five months after his arrest warrant was issued.

As several commenters to Daley’s piece noted, Charles Russo bears a striking resemblance to Jerry Seinfeld. Meantime here on Slabbed, Russo looks to soon be joining Keith in the Hall of Infamy.

There are some media outlets that self impose muck blackout periods in advance of elections, some as long as two weeks out. We can tell from this Advocate story on St Tammany DA Candidate Roy Burns claiming two homestead exemptions that if such a news blackout policy exists there, two weeks is not the deadline. I like that.

The Trainor campaign has complained about the Advocate’s coverage of his candidacy for DA, but it looks to me like the gang at the Advocate has been equal opportunity in this particular race. That said James Gill today continues to explore the civil suit-criminally charged St Tammany justice-industrial complex and the ties that bind the players. Worth noting is Brian Trainor’s campaign promise to not do civil work if elected DA, something he should enforce on the entirety of his office should he be elected. Full time criminal justice employees have no business doing outside work as it too easily leads to very bad places.

Finally I am ready to roll out some courthouse muck and maybe even a little something about Mary. 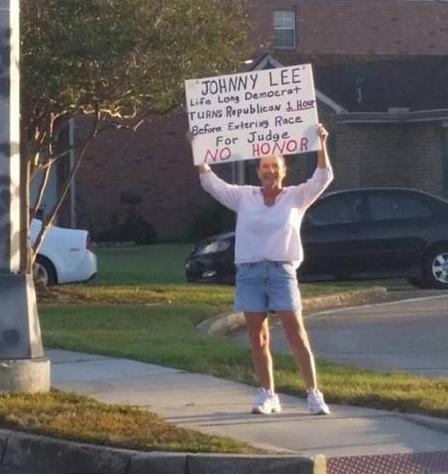 Somewhere in Johnny Lee’s candidacy for First Parish Court Judge and the support he is getting from local GOP power players illustrates why party affiliation is actually meaningless down South where everyone running either belongs to or switches just in advance of running to one political party.