Last Thursday evening the Bay St Louis City Council held a recessed meeting that was devoted almost entirely to the troubled state of the City’s finances. Audit report excerpts were read, sweeping proclamations regarding accountants being meek were declared and into nonsalient side subjects was the discussion frequently steered. And yet through it all the public still managed to learn a few things.  I thought Geoff Belcher did a great job with his recap of the meeting for the Seacoast Echo so it is there we start:

Kolf said one of the reasons the city’s mandated audit is being held up is because the auditor is concerned that the utility rates aren’t high enough to pay everything and are a “going concern.”

If the city fails to raise rates, he said, that could make the bank trustees in charge of the bond nervous and they could legally require the city to pay the funds back immediately.

Falgout countered that the auditor is concerned about far more than the city’s utility budget.

So we getting this folks, we have the City Clerk blaming the Going Concern opinion on just the Utility Fund while the Auditor’s are telling the City Council they are concerned with the entirety of the City’s dismal financial situation. Kolf used that misconception in an attempt to strong arm the City Council into adopting the Mayor’s Utility rate hike, a proposal that according to Councilman Joey Boudin the council saw for the first time just before the start of the recessed meeting.

But there is more because the finger wagging from Clerk Kolf and City Attorney Rafferty was just beginning:

City attorney Donald Rafferty told the council he felt the proper thing to do would be to announce to the bank trustees that the city likely not be able to make the first payment on the refinanced bond.

This is too rich folks it really is and one has to wonder who Mr Rafferty’s client is at this point.  You see folks it would be one thing if this was just a simple case of the pot trying to give the bums rush to the kettle but the level of dishonesty in the “advice” that was being dispensed last week to the council was simply stunning. The scare tactics worked too:

In a public forum after the vote, Bay resident Libby Garcia blasted the council for failing to act.

“If the city is in such desperate need of extra income,” she said, “why are we so afraid of sending a bill out?

“I told you five years ago … that you are making a mistake by keeping your rates so low.”

To set it up, early in the meeting Clerk Kolf addressed the audit, including the draft audit findings which he minimized every way he could, ultimately dismissing them as unavoidable due to the small size of the City’s finance department.  Having read the findings and having a wee bit of experience as as contract governmental auditor I knew immediately Kolf was completely full of it.  The fact of the matter is if there are members of the City Council that don’t understand they should be profoundly embarrassed to have their name on such a bad report, I’ll go ahead and point that fact out now while you guys go tumbling off the turnip truck.  But beyond that what we have here is City Clerk Kolf talking out of both sides of his mouth.  You see folks its evidently OK when the Administration actually violates debt covenants as draft Audit Finding 2013-9 illustrates: 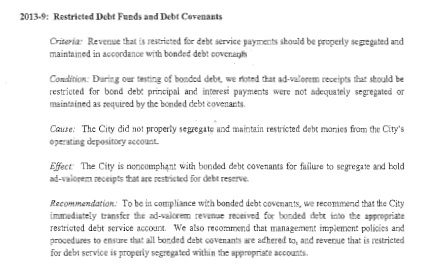 This in turn raises multiple questions that I would have in my mind were I on the City Council (Thank God I’m not):

These questions would be just a beginning because I would make Clerk Kolf explain why it is OK for Mayor Fillingame to lead the City into actually violating its existing debt covenants and not OK for the City Council to have some time to digest the continually changing organization charts and financial projections the Administration furnishes it, especially since the first payment on the new debt with Hancock Bank is not due for almost a year.

It is at this point I must share that I do not know which is worse. We have a Mayor that makes it up as he goes along and whose idea of a strategic plan is surviving financially until next month.  On the other hand we have City Council members that allow themselves to continually have the dunce cap placed upon their heads by the Mayor’s advisors, three of them in fact.  In the business world it is known as self-respect and it is lacking on the City Council.

Invoking the Bond Trustee is rich on another level because they typically do not micromanage their clients, in fact, at its most basic they simply care about being paid. However the City Attorney’s cynical use of Hancock Bank’s Bond Trustee has caused a boomerang as rumors are now swirling regarding whether one of the City Councilmen, my City Councilman in fact, should have recused himself from voting on the debt and related matters altogether.

On that subject my personal attitude is I did not see Hancock Bank listed on the last municipal ballot.  I did not see City Attorney Don Rafferty’s name listed on the last municipal ballot nor did I see Clerk David Kolf’s name.  I did see Doug Seal’s name and on balance he has well represented the will of his constituency including last Thursday night. To the extent the guy that dispenses legal advice to the City Council (without one cent of professional liability insurance coverage which is a truly horrific thought) got him in trouble by publicly putting Councilman Seal’s wife in a bad spot shows the terrible state of the City’s finances and the desperation inherent to that fact.  There is no one except his own family that Hizzoner will not put under the bus to continue fueling the spending addiction.

Mayor Fillingame did not lead Bay St Louis into this financial mess in a few days as it has been years in the making.  Blindly raising taxes or Utility rates in response to the financial mismanagement is not the answer nor are knee jerk reactions fueled by scare tactics.  What we do need is an honest discussion on the overall state of the City and that discussion absolutely has room for taxes and increases in Utility rates. It also must include some significant cost cuts as the days of the Water and Sewer fund picking up the tab on salaries that should properly be charged to the general fund needed to be over yesterday.

Coming up next, Slabbed will explore how many City of Bay St Louis Water and Sewer billing clerks it takes to screw in a lightbulb at City Hall and more. Stay tuned.