Horrifying isn’t too strong of a term to describe what I witnessed back on May 6th during the City Council’s finance workshop.  Hopefully I’ll be able to explain why I was horrified as the subject matter is somewhat technical in Mississippi Municipal Finance.  From a big picture standpoint, financially the City of Bay St Louis is a rogue municipality, making loans without any statutory authority to do so while spending fantasy tax revenue, unrealistically budgeted and never received.  Worst of all is the Mayor is in deep denial – either that or he gets his kicks from telling whopper after whopper about the state of the City’s finances. It does not serve the public interest.

To me, there were two moments that encapsulated the entire two hour workshop the first was when auditor Jennifer Bell was giving her presentation on the internal control and legal compliance findings.

To set up her finding on purchasing, rumors have been swirling since last August the City was financing its deficit using what is most commonly known as its trade payables, or in Mississippi Governmental parlance its claims docket.  Whether a local government or a struggling business, when cash gets tight the first way operating cash flow is financed without a bank is to simply let bills ride until the money comes in to pay them.  Robbing Peter to pay Paul is a time honored way of buying time in the business world for cash starved entities public and private. Unfortunately Mayor Fillingame and City Clerk David Kolf have been telling whoppers about the City’s cash flow being A-OK for months so when the rubber met the road the Mayor essentially accused the auditor of fabricating her results.  Dwayne Bremer’s story on the workshop made it sound like it some sort of difference of opinion.  Here is the salient snippet:

Falgout said the draft audit states that the city is experiencing a cash-flow problem and that bills were being paid in order of priority, rather than order received.

Fillingame said that he challenged the assertion and pointed to the fact that the audit is not yet complete.

Audit results are true/false propositions folks. Either the City has delayed paying its bills for 100 days or they didn’t. And since business do not run their bills late 100 days for no reason, a cash flow problem would be the only reason it would do so.  Here is the draft finding: 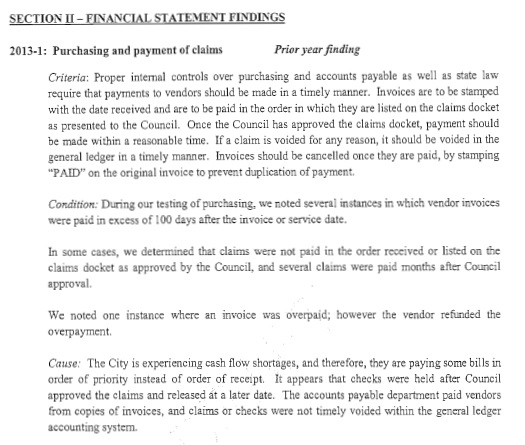 One can’t exist in the business community here in the Bay without hearing first hand accounts about the trials and tribulations of City venders being paid extremely late for the goods and services they provided the City, so it doesn’t surprise me in the least the auditor found several instances of these very late payments in their non-payroll triple-purpose cash disbursement test. Unfortunately, Hizzoner’s denials to the bitter end also do not surprise me as this situation is akin to a spend thrift hiding his spending addiction.

The second moment in the workshop that encapsulated how bad the financial leadership is in the Fillingame administration was after Auditor Bell informed the City Council that the $500,000 loan the City made in November 2013 was “without statutory authority”.  Councilman Boudin read the minutes of that prior meeting when the loan was approved to the Mayor, wherein the Mayor clearly indicated to the City Council that the loan complied with all applicable legal requirements.  After Boudin read the minutes of that meeting to the Mayor, Hizzoner simply smiled and shrugged his shoulders.  You’d think by now that on financial issues the City Council would realize Hizzoner’s word is worthless but that is where we cross into Alice in Wonderland territory because it is becoming clear certain City Councilman would rather shirk their fiduciary duty to comply with the law in favor of going along to get along so long as Mayor Fillingame pats them on the head and tells them it is OK.

The draft audit is chock full of major audit findings, including Material Weaknesses but there is a short finding that contradicted the premise of the Mayor’s latest financial plan, which is incorrectly termed a strategic plan by the Administration.  Dwayne Bremer over at the Echo explains:

Bay St. Louis city leaders on Tuesday discussed a myriad of issues at a budget workshop, including deficiencies in the city’s upcoming audit; restructuring the city’s debt; and dedicating a new millage to pay it off – which could result in a tax increase.

The workshop began with Mayor Les Fillingame asking the council to consider his strategic plan, which he said will solve many of the city’s financial problems. 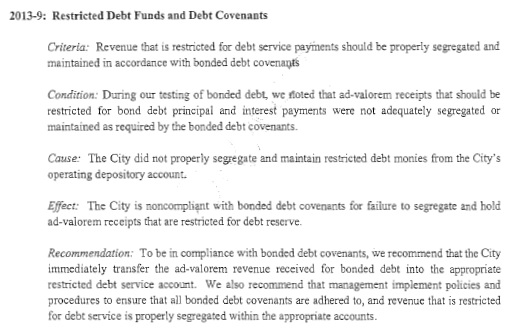 Is it me or does this audit finding indicate the City has not set aside any money for debt repayment as required by the restrictive covenants attached to the bonds? And if the City was required to set aside money for debt service repayment why hasn’t it? That’s a rhetorical question because we already knew the City was robbing Peter to pay Paul. Mayor Fillingame is also evidently even willing to break the City’s debt covenants to conceal the extent of the problems. Finding 2013-6 reinforces my point as it discloses that the City even remitted its State Withholding payments late in the process subjecting the City to draconian Department of Revenue penalties.

So, after leading the City Council up fools hills last November to take out what Councilman Falgout now terms an “illegal loan”, Hizzoner wants to lead the gang straight back up to the same spot, this time doubling down in the process. And the council voted 4-3 to begin that process thus the Alice in Wonderland type quality to the entire affair. It was the failure of the Mayor and Council to timely and sufficiently address the financial problems in the Water and Sewer fund that got us to this place.  It appears the solution de jour is to kick the can down the road while the Mayor makes it up as he goes.

The next workshop on the City’s finances is set for May 20.  Stay tuned.

39 thoughts on “Writing checks that can’t be cashed: Bay St Louis is broke”