I’ll believe it when I see it Ladies and Gents. Meantime I could not make it to Hattiesburg yesterday so I have no analysis to offer beyond that already in the media so here are the salient links:

Anita solves the Matt mystery for those that are still wondering.

Come to think about it maybe I can add a wee bit to Anita’s story because she was a love putting this blurb in her account of the Walker plea hearing:

Walker is working, he told Starrett. He and two others own a Gulfport company called Precision Marketing Group.

Anita does not identify the two people with whom Scott Walker is working but she left a clue that dovetails in nicely with something a source with knowledge of the Mississippi political landscape, who requested anonymity, mentioned to Slabbed in confirming a local tip that I received that Hancock County Board of Supervisor Steve Seymour was planning a run for the Southern District PSC seat vacated by Leonard Bentz. So who is Precision Marketing Group?

There is nothing wrong with these guys making a buck together and all three have very good people skills so marketing legal services for others is a natural fit.  It also solves the age old mystery of the Lynn Fitch fundraiser as told realtime by James at Jackson Jambalaya as Supervisor Seymour, purportedly then a Democrat, was an honorary host for the Republican Fitch at the Walker hosted fundraiser.  Scott Walker has been a money train for Fitch since she first ran for office in 2011 and on its face Supervisor Seymour did not fit with the others. It now makes sense.

The same source with knowledge of the Mississippi political landscape, who requested anonymity per above, indicates to Slabbed that the relationship between Seymour and Walker is already being discussed at the money level of politics because to run in 2015 means laying the money foundation now.

Finally after the Scott Walker plea was signed sealed and delivered a reader sent me a link which indicates the property taxes on the Beach Front Walker Mansion are now in arrears. Here is the salient screen capture: 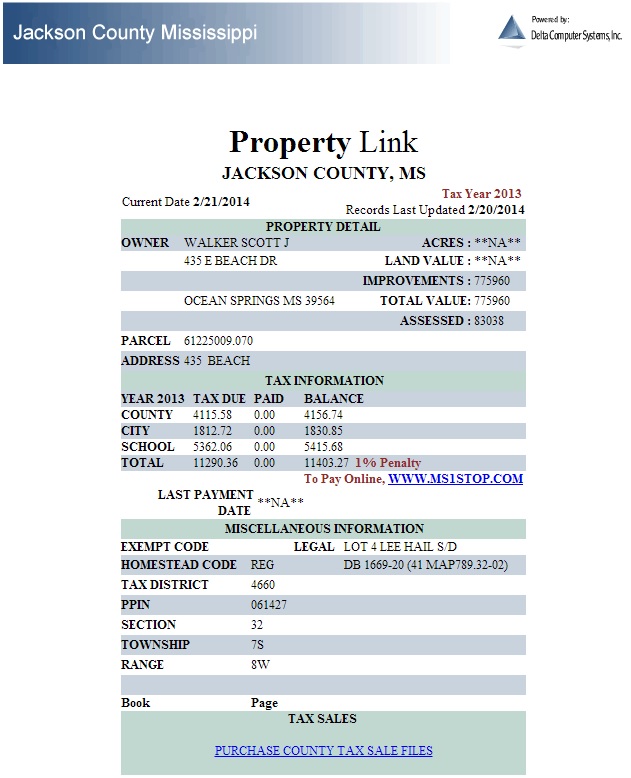 Lawyers like Arthur Madden do not come on the cheap and funding a criminal prosecution defense takes a big toll on one’s net worth. That pressure is showing.