Those economic data revisions really bothered me which is what moved me to write the post that contained the above quote to begin with.  While ordinary Americans have struggled since 2007 to keep their heads above water with sky-high gasoline prices and the economic collapse of 2008, our elected leaders have consistently tried to paint a brighter picture of the economy pointing to certain official statistics to make their point. The problem is the stats are subject to revision and it appears the data revisions are telling the real story and it isn’t a good one. Luckily for all of us I don’t have to go into great detail as the good folks over at The Economic Populist have done all the heavy lifting in a piece that is well worth reading. Here is a snippet:

On an annual basis, 2008 GDP was revised from 0% to -0.3%. 2009 shows just how bad the economy became with a new annual -3.5% GDP, revised from -2.6%. 2010 was revised upward by just 0.1% to 3.0% for the year. Below are annual GDP revisions. This graph was generated from ALFRED, which allows you to compare historical economic data. The dark red bars are the revised numbers, compared against the previous GDP, in green. 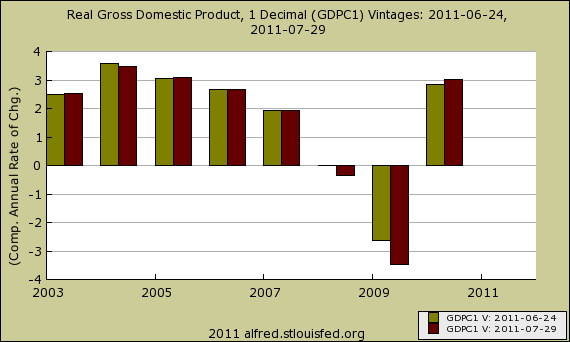 The bottom line? The economy is fugly.

Revisions normally go back 3 years and are done in July, but there were additional revisions that went back all the way to 2003. The summary of where these revisions came from is here. Bottom line, real GDP, or in chained 2005 dollars, is less than before the recession. In other words, our economy has shrunk and not recovered.

The data and pundits that I follow all indicate we have some rough economic water dead ahead as the Keynesianesque stimulus programs of 2009/2010 work their way out of the economic cycle. The silver lining is that we likely will have a nice buy opportunity on the back-end of the carnage. Strap yourselves in folks.